Alex Morgan’s husband, Servando Carrasco, has been cheering on the USWNT star from afar during the World Cup. The couple is used to the distance as Carrasco lives in Los Angeles where he plays in the MLS for the Galaxy. Morgan lives in Orlando where she plays for the Pride in the NWSL. The couple spent a short time together when Carrasco played for Orlando City.

The club declined to bring Carrasco back for the 2018 season and the Galaxy signed him to the squad. Carrasco noted that while the couple would prefer to live in the same city, they understand their soccer careers are temporary.

“It’s far from ideal to be that far from your wife,” Carrasco told Pro Soccer USA. “We know that this is temporary. We’re only going to be able to play professional soccer for five to six more years. We’ve got to take advantage of this, and know that when we’re done playing we’re going to be together.”

Carrasco has had to watch the World Cup from Los Angeles as he carries on his duties with the Galaxy. Prior to the start of the World Cup, Carrasco noted there was some hope he could attend the final if the USWNT advanced that far.

“Potentially, maybe for the World Cup final [on July 7, with the Galaxy off that weekend],” Carrasco explained MLSsoccer.com. “It’s not a short flight, so I’m keeping my fingers crossed, and hopefully it works out. But I’ll be supporting from here, for sure.”

Morgan has been honest about the challenges of the couple being apart. The USWNT star noted that it is difficult because the couple expected to be together in Orlando.

“I hoped that we would continue here together, that was our plan two and half years ago,” Morgan noted to the Orlando Sentinel. “I don’t want to sugarcoat it, it’s not easy…I think what was the hardest is just us expecting to live together and to kind of share our lives together here in Orlando. Unfortunately, that didn’t happen. Just moving forward, I feel like as much as we can see each other on off weeks or whatever it is, will definitely help.”

For now, Morgan is dedicated to catching up on Netflix shows when she is not playing.

“Now that hubby isn’t in Orlando anymore, I have soooooo much time for new shows. Please share good ones!! ??,” Morgan tweeted back in 2018.

The couple met as student-athletes at Cal. They eventually got married on New Year’s Eve in 2014. Carrasco and Morgan had a beach wedding in Santa Barbara, California in front of 180 friends and family members, per People.

“To be surrounded by our family and friends tonight in such a beautiful location, and on New Year s Eve to boot, has just been magical,” Morgan told People. “We are both so happy, grateful and excited to start our lives together as Mr. and Mrs. Carrasco. I truly married my best friend.”

Carrasco noted he only has admiration for all Morgan has accomplished during her career.

“She worked incredibly hard to be where she is, so clearly I’m going to celebrate her,” Carrasco explained to MLS Soccer. “Yeah, she’s a badass woman. So it’s cool to see that kind of stuff.” 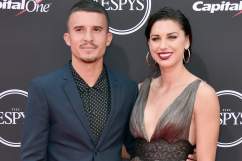