As Brooks Koepka climbed up the leaderboard at the WGC-Fed Ex St. Jude Invitational, his girlfriend, Jena Sims, was cheering him on in Memphis. Sims has become a regular at PGA tournaments and was also in Ireland for The Open Championship. Sims posted photos from the course to her Instagram Story.

One post included Sims riding around in a golf cart, while another caption noted: “Back at my favorite place #birdiesandbubbles.” Here’s a look at some of the photos Sims posted from Memphis.

GettyJena Sims gave fans an inside look at the PGA tournament on Instagram.

The Georgia native met Koepka at the 2015 Masters, and her schedule as an actress allows her to travel to tournaments. Sims grew up watching golf and enjoys being at the tournaments.

“He’ll say to me all the time: ‘It must be so boring walking around in the crowd watching me play,’ Sims explained to Golf Digest. “And I’m like, no way. I actually really enjoy it. I grew up around golf; my dad is a huge golfer. So I really enjoy watching him and being around there. Everyone’s so nice.”

Sims Has a Message for Those Questioning Their Relationship

When the beach is rocky but your relationship ain’t ?

Ever since the viral moment of Koepka snubbing his girlfriend as she went in for a kiss, some fans have questioned the happiness of the couple. Prior to The Open Championship, Sims had a subtle message on Instagram for the doubters. Sims posted photos from a rocky beach but made it clear it was not symbolic.

“When the beach is rocky but your relationship ain’t ?,” Sims noteed on Instagram.

GettyBrooks Koepka pictured with girlfriend Jena Sims at the 2019 ESPYS.

Koepka and Sims both emphasized on social media how much fun they had at the 2019 ESPYS. Koepka took home the award for the Best Male Golfer over Tiger Woods, Francesco Molinari and Justin Rose, per Golf Channel.

Heading into the final round of the St. Jude’s Invitational, Koepka trailed Rory McIlroy by one stroke for the lead. Despite holding a slight edge, McIlroy admitted that Koepka is the man to beat thanks to his recent form.

“It is exciting,” McIlroy explained to Golf Digest. “He’s the No. 1 player in the world, four majors in the last three years. He’s the man right now.”

Getting the feels all over again from @erikruthoff’s images from the Pageant of Hope. Thank you for capturing the joy we all felt at Gambier Village! @pageantofhope @yesisoccer swipe ➡️

Sims has used her platform for good through the non-profit Pageant of Hope. The organization uses pageants to enrich the lives of young people around the world.

During an interview with Golf.com, Sims was asked for her thoughts about Koepka’s success on the golf course coinciding with the start of their relationship. Sims shied away from taking any credit but did note she tries to keep the golfer relaxed in what can be a stressful time during high-stakes tournaments.

“He’s very aware of his success and the timing of our relationship,” Sims noted to Golf.com. “I can’t take the credit for that. All I can do is make him happy. I’m quirky and weird, I like to make him laugh. I encourage him to be himself.” 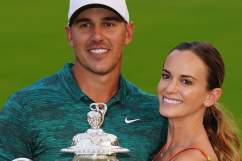