Getty Kawhi Leonard has been talking with the Lakers since free agency began.

There is buzz about Kawhi Leonard signing with the L.A. Lakers, but it does not appear to be a done deal just yet. Fox Sports’ Chris Broussard reported that the Lakers are Leonard’s “first choice”, but he has a few requests for the team including some staff additions.

“I’m being told the Lakers are Kawhi Leonard’s first choice,” Broussard told Fox Sports. “He and his camp spoke with Magic yesterday and laid out what they want from the Lakers. Nothing crazy, just some additions to the staff and asking ‘Is Kawhi going to be treated like LeBron in the organization?’, and all of that. As long as Jeanie doesn’t do anything to screw it up in the meeting I’m told that’s his first choice.”

“Just heard that Kawhi is meeting with the Clippers tonight but the Lakers hold the upper hand, unless Doc work his Magic tonight it’s looking very strong that Kawhi will be in Purple and Gold!!!” Perkins tweeted.

While the majority of rumors have centered around the Lakers, the Clippers and Raptors are still believed to be in the race. ESPN’s Brian Windhorst noted he believes the Clippers are the favorite but admitted that the Lakers have gained momentum.

“We don’t know where Kawhi is going,” Windhorst said on ESPN radio, per Clutch Sports. “I am feeling more like the Lakers are a chance. I wouldn’t have thought that was a chance. I thought it was Clippers for a long time and then I thought maybe he’ll stay in Toronto. I do believe there is some real traction towards the Lakers. I still think the Clippers are the pick, but I admit I don’t know at this point.”

As Heavy detailed earlier, LeBron James’ pitch to Kawhi Leonard involves handing over the keys to the team to the All-Star forward. ESPN’s Ryen Russillo reported that James is looking to preserve his body to allow him to play in the NBA with his oldest son, Bronny James Jr.

"Kawhi's camp called Magic Johnson several times when Magic was in church. If this happens, there should be 2 people the Lakers & all of LA should thank: Magic Johnson & LeBron James. … I believe Kawhi will end up with the Lakers. They're his first choice." — @Chris_Broussard pic.twitter.com/wHH5h2fIXV

What has been clear is that Leonard has been in communication with Magic Johnson during free agency. While league rules prevent Johnson from being in the actual meetings, Leonard is free to speak with the Lakers legend privately. The Los Angeles Times Broderick Turner reported that Leonard asked Johnson if the team tried to trade for him when he was with the Spurs. Silver Screen and Roll detailed Leonard’s question for Johnson.

There was one interesting question (Leonard) had for Magic: ‘Did you guys try to trade for me when I was in San Antonio?’ And the answer was ‘yes, but because it was Gregg Popovich and the San Antonio Spurs, and our history, they were asking for 2,000 draft picks — well, not 2,000 — like four draft picks, first-round draft picks, and we just couldn’t do that.’ And that was one of his questions. 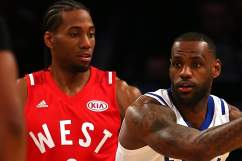