LeBron James’ pitch to Kawhi Leonard to have him join the Los Angeles Lakers has family ties. It has been widely reported that James is willing to take a backseat to Leonard, but the reason may surprise you. ESPN’s Ryen Russillo noted on The Woj Pod that James is looking to preserve his body so he can play with his son, Bronny James Jr.

From what I’ve heard, and I know you trust me with this just because I have these weird relationships, especially living out here in Los Angeles now. The Kawhi pitch, whether it is from the Lakers or LeBron, is this: LeBron is basically saying, ‘Hey, this is going to be your team in two years.’ I have heard this for years, but LeBron at one point wants to play with his son. And depending on when that happens, that is going to be his priority and that may not be with the Lakers. So, I don’t know when that is going to be and that [is why LeBron is] willing to defer. LeBron is saying for the first time in his basketball life that he is willing to defer the style of play.

They are going to tell [Kawhi] anything he wants to hear. They are going to tell Kawhi, ‘You can take all the last shots. We can run the offense through you.’ And LeBron has a style of play that could, I’d say, adapt to another guy like that. Anthony Davis puts up massive numbers without being selfish so I could see it working.

Russillo was running through the likely pitches from the Lakers and Clippers to Leonard. It remains to be seen whether James’ pitch to give up unofficial ownership of the Lakers team will work for Leonard.

For James to have a chance to play with his son, he needs to play at least four more seasons before even having the opportunity to make this a reality. Bronny James graduates from high school in 2023, and there is a good chance the rules would allow him to go straight to the NBA if he so chooses. The NBA is expected to lower the age limit in the coming years, and James’ son would have an opportunity to come straight to the league if NBA scouts deem him ready.

Bronny James could also reclassify which would allow him to graduate in 2022 and enter the draft earlier if the rule change is adopted. We have seen players like RJ Barrett and Marvin Bagley reclassify in high school to allow them to reach the league one year sooner.

If James is looking to play another five seasons, it makes sense that he would be willing to take a step back for Leonard. James would be 38 years old by the time his son is NBA eligible, but, keep in mind, he came into the league straight out of high school. James also has additional wear and tear on his body from multiple NBA finals appearances as well as stops with Team USA.

Russillo’s report about James rings true to an idea the All-Star said himself in a 2017 interview with GQ. James noted that he would “love” to stick around to play with his oldest son in the NBA.

Maybe you’ll play against little Bronny when he gets to the league?

“I don’t know if I could play washed, but I damn sure would love to stick around if my oldest son can have an opportunity to play against me. That’d be, that’d be the icing on the cake right there.”

Yeah, but you can’t let him embarrass you out there, though.

James’ pitch to Leonard may have worked as several reports indicate the Lakers are the frontrunners to land Leonard. NBA insider Arye Abraham reported that there are “heavy rumblings” that Leonard will sign with the Lakers.

“I’m told that there are HEAVY rumblings that Kawhi Leonard will choose the Los Angeles Lakers, sources say,” Abraham tweeted. 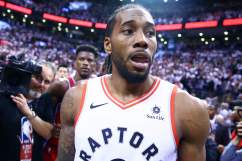