Instagram Former "Last Chance U" star Ronald Ollie was competing for a roster spot with the Raiders.

There is a growing number of former “Last Chance U” players in the NFL, and Ronald Ollie is looking to join the list. Ollie signed with the Raiders as an undrafted free agent meaning he still has to make the final roster in training camp.

Ollie will be battling Justin Ellis, Johnathan Hankins, Maurice Hust and P.J. Hall at the defensive tackle position, per 247 Sports. Ollie landed with Nicholls State after his stop at EMCC which was documented on “Last Chance U.” 247 Sports reported that Ollie has shown signs of improvement during his short time in camp.

So far, the early returns have been promising for Ollie. He has been working primarily with defensive line coach Brentson Buckner while improving his craft. Little details have been critical to his growth, such as “hit the offensive lineman lower” when rushing the passer. There were moments during Organized Team Activities and minicamp in which Ollie was hitting the blocking dummies near the very top instead of properly utilizing his shorter height and gaining leverage…

Dakota Allen (@dakota_allen40) has officially made it to his first camp with the rams pic.twitter.com/nZAYfj1Xvf

Dakota Allen became the first “Last Chance U” player to be drafted, per SB Nation. Allen was selected in the seventh round by the Rams with the No. 251 overall pick. The linebacker signed a four-year, $2.59 million contract with L.A. but only $74,576 is guaranteed, per Spotrac.

Like Ollie, Allen will also have to fight for a roster spot despite being drafted. Allen believes the key to him securing a spot on the Rams is to prove himself on special teams.

“Basically just come out here for training camp and prove why I do deserve a spot,” Allen explained to USA Today. “I feel like I definitely need to show up on special teams for this training camp. I also need to make a couple plays on defense so I feel like this is a great opportunity, and just excited to be here.”

John Franklin III Has Transitioned to Cornerback With the Bears

GettyFormer “Last Chance U” star John Franklin III is still fighting for a roster spot with the Chicago Bears.

Former “Last Chance U” quarterback John Franklin III was one of the first players to the make the NFL. Franklin went undrafted but spent some of the 2018 season on the Bears practice squad. After last season, Franklin signed a reserve/future contract with the Bears. This allowed him to participate in offseason workouts, OTAs and minicamp, per AL.com.

Franklin is hoping to make the final 53-man roster rather than just the practice squad this time around. The former “Last Chance U” star has changed positions several times throughout his career. He transitioned from quarterback to wide receiver at Auburn and switched to defense at the NFL level.

Safety C.J. Reavis is another “Last Chance U” player that is in the NFL. Reavis was featured during his time at EMCC and now plays for the Jaguars. Reavis is entering the second season of a three-year, $1.7 million contract, per Spotrac. 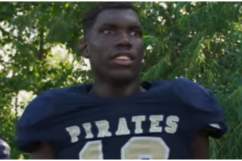 Read More
College Football, Football, Last Chance U, Netflix, NFL
The number of "Last Chance U" players in the NFL is growing. Find out the latest on Ronald Ollie, Dakota Allen, John Franklin and more.