Twitter Malik Henry is no longer enrolled at Nevada.

Please be advised there are spoilers ahead regarding “Last Chance U” and Malik Henry.

Former “Last Chance U” quarterback Malik Henry is competing for the starting quarterback position at Nevada and some believe he will end up as the Wolf Pack’s QB1. Athlon Sports predicts Henry will win the starting job in a recent article detailing the quarterback battles across college football.

Henry is competing against Carson Strong and Cristian Solano for the starting job, per Athlon. Henry shined earlier this year in Nevada’s spring game going 16-of-28 for 211 yards and a touchdown.

“I really just have to stay in the playbook, stay around my guys,” Henry said after the spring game, per 247 Sports. “Working on timing routes, make sure we all have great chemistry. If we do that I think we’ll go out there and be a well-oiled machine. We’ll be able to flow, the offense will be running smoothly. I think we just need more time together.”

As Season 4 illustrated, Henry’s time at Independence ended differently depending on who you ask. Brown was seen telling the coaching staff that he brought back Henry to be the scout team quarterback and help with the younger players. Henry appeared to have the expectation that he was going to play and did end up finding the field early in the season.

Just a few games into the season, Brown announced to the team that Henry had been cut. Henry’s version of the story was that Brown told him Indy did not have the offensive line to protect him.

Henry walked-on to the Nevada team earlier this year and began competing for the starting position. Henry spoke with Nevada Sports Net about how he ended up with the Wolf Pack.

“A couple of coaches from Nevada reached out to me and with time we built a relationship, we built a rapport and our bond got stronger and stronger and I just feel comfortable with Nevada,” Henry explained to Nevada Sports Net. “These coaches are great. The first day they really welcomed me in here and treated me like family. A lot of other places can say they do that, but here I felt that.

Former Independence offensive coordinator Frank Diaz believes Henry will “get a chance” to play in the NFL. Diaz discussed his expectations for his former quarterback in an interview with 247 Sports.

“I expect him to be the best he can possibly be,” Diaz explained to 247 Sports. “I think he knows how talented he is, and the sky is the limit for him. I think he’s well aware of what are some of his troubles. But I think sky’s the limit for Malik and I really expect him to get a chance to play for a team in the NFL.” 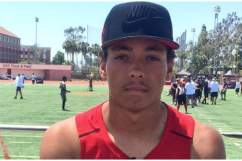 Read More
College Football, Football, Last Chance U, Netflix
Malik Henry has a chance to win the starting quarterback spot at Nevada. Find out the latest on the former "Last Chance U" quarterback.