Getty Roger Federer's dad, Robert Federer, along with his wife, Mirka Federer, and mom, Lynette Federer, look on at the 2018 Wimbledon tournament.

Roger Federer’s family is more important to the tennis star than winning any tournament he plays. Roger’s parents, Robert and Lynette Federer, helped him learn the game of tennis. Now, Roger and his wife, Mirka Federer, are raising a family of their own with four children. Roger also has one sister, Dianna Federer, who is also the mother of twins.

Roger admits that his dad, Robert, exercised tough love as he developed his game. He recalled his dad leaving him during a practice session after Robert believed his son was not taking it seriously.

“I was very lucky that I had wonderful parents and still have, they have been unbelievably supportive,” Roger said, per Tennis World. “Playing with my dad, he would not allow me to do the moonballs, hit super high that they would bounce high because old school everybody used to use the continental grip and play slice and I used to challenge him. He would get upset that I would not listen and then eventually got so fed up that he said, ‘Look, if you want to continue, If I continue being this way I am leaving.’ He said, ‘Ok I am leaving, I will see you at home.’ He put five Swiss Franc on the bench, I waited for half an hour, he never came back.

Roger eventually found his way home through the train station, but the moment helped the tennis star realize what it was going to take to become a successful athlete. All the hard work paid off as Roger is one of the greatest tennis players to have ever played.

“And when you start thinking of your family or your friends, you go back in the gym, you go back into the practice courts where there was nobody watching, and all of the sudden you realize we’ve put in so much work and it all paid off,” Roger told CNN.

Robert was born in Switzerland and met Roger’s mom, Lynette, when he went to South Africa on vacation, per SA News. As a child, Roger spent time in both South Africa and Switzerland which helped broaden his perspective.

“I think it comes from the values of my parents; and me, myself, when I was young being in South Africa…seeing that Switzerland is different to southern Africa, that you can have a big impact if you do it the right way,” Roger noted, per SA People.

One of the most impactful moments of Roger’s life came in the form of tragedy in 2002. Roger’s former coach, Peter Carter, died in 2002 in a car accident. Nearly two decades later, it is still something Roger talks about and refers to it as a “wake-up call.”

“I guess he didn’t want me to be a wasted talent so I guess it was somewhat of a wake-up call for me when he passed away and I really started to train hard,” Roger explained to CNN. “Peter was really a really important person in my life because I think if I can say thank you for my technique today, it’s to Peter.” 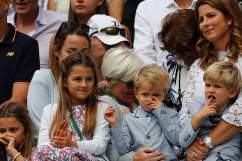