Ronald Acuna Jr. is originally from La Guiara, Venezuela and comes from a family rich with baseball tradition. Ronald’s dad, Ronald Acuna Sr., spent 11 seasons as a pro baseball player. Ronald Sr. played eight seasons in the minor leagues and bounced around different international leagues for the rest of his career. Ronald Sr. admits he could have done more to have a better career and encouraged his son not to make the same mistakes.

“Don’t make the same mistakes I did,” Ronald Sr. told La Vida Baseball. “Show people who you are. Run every time you hit the ball, because running hard will take you far…I had talent. I knew how to play baseball, but I never cared about lifting weights. Nor did I have the best attitude on the field. Those two mistakes cut short my career. Otherwise, I would have made it.”

Ronald appears to have taken his father’s advice as the Braves outfielder was named an All-Star in just his second MLB season. Ronald also signed a $100 million contract solidifying his long-term status in Atlanta.

Ronald Acuna Jr. Comes From a Family of Baseball Players

It is not just Ronald’s dad that has a baseball background but also several members of his family. According to La Vida Baseball, Ronald’s grandfather was a pitcher, and he is also related to a number of current and former MLB players including Alcides Escobar and Vicente Campos. Ronald Sr. compares his son’s background to a “good rum.”

“Ronald Jr. has the lineage,” Ronald Sr. noted to La Vida Baseball. “Like a good rum, he has a fancy pedigree. Not only have I mentored him, he’s also benefited from his cousins, older brothers of sorts who have advised and guided him during his journey to the major leagues. He was born with talent. But the little things that you do to polish that talent, he learned from all of us.”

Both of Ronald’s parents have ties to the Escobar family, a group with so many pro baseball connections it could field two full teams for its annual game, per MLB.com.

Former Braves scout Rolando Petit was one of the few talent evaluators who saw something in Ronald. Rolando worked 26 years with the Braves and was convinced Ronald could be something. Rolando also scouted his father and admits to missing in his evaluation of the elder Acuna.

“If you like a player, sign the player — because you never know if he will make it to the big leagues,” Rolando admitted to MLB.com. “I missed on Ronald Sr., and I knew him. I missed on Altuve, but that’s baseball. Sometimes, you have to go for it — especially if the player checks all of the boxes. Ronald Jr. could hit, he was athletic, and I knew everything about him. The passion was there. That smiling face you see now is the same face he had back then.”

Rolando may have missed on Ronald Sr., but it looks like he nailed his evaluation of his son. This is much to the delight of the Braves franchise who is hoping to build around the young star for the next decade. 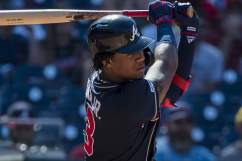 Ronald Acuna Jr.’s Contract: How Much Money Is His Salary With the Braves?