Getty Skaggs pictured in action for the Angels on April 12.

Tyler Skaggs was a starting pitcher for the Los Angeles Angels who died July 1 at the age of 27. His cause of death was not immediately revealed, though police have said that no foul play is suspected. Skaggs, known to his teammates as “Swaggy,” would have turned 28 on July 13.

Skaggs’ death in Texas was first announced in a statement from the Angels. The Angels are in Texas to play the Rangers. Monday’s game has been called off because of Skaggs’ death.

Skaggs was found dead in his hotel room. The Southlake Police Department said in a statement that officers responded to the Hilton hotel at 1400 Plaza Place at 2:18 p.m. on July 1. There, officers found Skaggs unresponsive.

The Angels statement read: “It is with great sorrow that we report Tyler Skaggs passed away earlier today in Texas. Tyler has, and always be, an important part of the Angels family. Our thoughts and prayers with his wife Carli and his entire family during this devastating time.”

1. Skaggs Pitched 2 Days Before His Death for the Angels in a Loss to the Athletics

Skaggs pitched for the Angels two days before his death, in a 4-0 loss to the Oakland Athletics at Angel Stadium. Skaggs pitched four innings during the game. Skaggs was on the injured list between April 15 and 26.

Skaggs final Instagram post showed him with his teammates en route to Texas. On May 14, the Angels account tweeted that Skaggs was a “lifelong” Minnesota Vikings fan and posted photos of the late pitcher meeting Kirk Cousins.

Skaggs’ death marks the second time in just over 10 years that the Angels have mourned the death of a starting pitcher in or entering his prime. Nick Adenhart was killed in 2009 when the car he was riding in was broadsided by a suspected drunk driver. 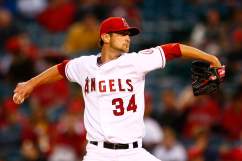 3. Skaggs’ 2018 Wedding to His Wife Carli Was Nearly Canceled Because of the California Wildfires

Skaggs married his wife Carli Miles in Southern California on December 1, 2018. The couple’s wedding was nearly ruined when the parts of their venue was destroyed due to wildfires.

Happy Valentine’s Day to the love of my life ??

Skaggs was quoted as saying of the wedding, “This was important to us. But it was nothing compared to the way people’s lives were being impacted. A thousand things go into planning a wedding, but no one ever plans on their venue burning.” In the same article, Carli said, “We were very lucky.”

Later in the same interview, Carli said that being a “so-called baseball wife” meant that the couple’s schedule was often up-in-the-air. Carli said that they had recently purchased a home together in Santa Monica, California in addition to starting a “rainy day fund… Carli wants his children to be able to see him pitch.” 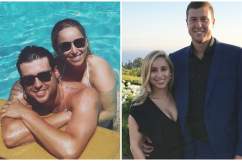 4. Former MLB Pitcher Phil Hughes Said When He Spoke to Skaggs, the Angels Starter Was ‘So Excited About the Season’

I just had lunch with Tyler a couple weeks ago. We talked pitching, life. He was so excited about the season. Absolutely gutted. I’m sick

Former New York Yankee Phil Hughes wrote an emotional tribute on Twitter in the immediate aftermath of Skaggs’ death. Hughes said, “I just had lunch with Tyler a couple weeks ago. We talked pitching, life. He was so excited about the season. Absolutely gutted. I’m sick.”

Baseball commissioner Rob Manfred paid tribute to Skaggs in a statement, saying: “I am deeply saddened by today’s tragedy in Texas. All of us at Major League Baseball extend our deepest condolences to Tyler’s wife Carli, their family, their friends and all of his Angels’ teammates and colleagues. We will support the Angels’ organization through this most difficult period, and we will make a variety of resources available to Tyler’s teammates and other members of the baseball family.” 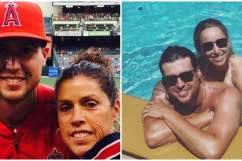 5. When Skaggs Returned From Injury in 2016, He Walked on to a Future Song With the Lyrics ‘You Should’ve Never Doubted Me/Imma Work ‘Til My Last Breath’

When Skaggs returned from a long-term injury lay-off in 2016, he walked on to the Future song, “Last Breath.” The song includes the lyrics, “You should’ve never doubted me/Imma work ’til my last breath.” The song appeared in the 2016 movie, “Creed.” A 2016 article on Major League Baseball’s website refers to him as a “hip-hop aficionado.”

Read More
5 Fast Facts, Baseball, Breaking News, Death, MLB, R.I.P.
Tyler Skaggs was a pitcher with the Los Angeles Angels. He died on July 1 at the age of 27. His cause of death was not immediately revealed.