The United States meets Mexico Sunday night in Soldier Field with a Gold Cup title on the line. According to MLS Soccer, the two programs will face off at 9:15 p.m. Eastern time on FS1 and Univision. The Americans’ only victory over Mexico in a Gold Cup final came in Soldier Field back in 2007.

A new-look USMNT roster is reasserting itself on the North American and Caribbean stage after 2017’s embarassing flop to Trinidad and Tobago. After crushing Guyana and Trinidad and Tobago by a combined score of 10-0, the Americans barely edged Panama and Curacao by identical 1-0 margins.

The United States advanced to its 11th-ever Gold Cup final with a 3-1 victory over Jamaica Wednesday night in Nashville. Midfielder Weston McKennie struck lightning in the 9th minute to give the Americans the lead, and Christian Pulisic tacked on two more scores.

Mexico qualified for the final with a 1-0 squeaker over Haiti. El Tri head coach Tata Martino entered the Gold Cup with some new faces to the roster. In particular, he added Uriel Antuna at the last second, which turned out to be an excellent choice.

Antuna notched a hat trick in the opening 7-0 rout over Cuba. He scored one more in the 3-2 triumph over Martinique in the Group Stage finale. Sandwiched in between, Mexico controlled nearly 70 percent of possession in a 3-1 win over Canada.

Things started to tighten up in the elimination rounds. First, Mexico edged Costa Rica on penalty kicks after entering extra time locked up at 1-1. It wasn’t until Carlos Salcedo converted on his and Costa Rica’s Keysher Fuller was denied that El Tri could breathe easy again.

Let’s look at the USMNT’s chances in this rivalry matchup in the final.

As of June 14, the Americans are ranked No. 30 in the FIFA World Rankings. Mexico, meanwhile, is ranked No. 18.

The United States has done the most work during this tournament with defense. Behind a strong backline led by Aaron Long, no team scored on it until the 69th minute of the semifinals. 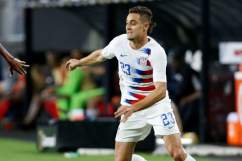 The offense has had its ups and downs, but when the full complement of players have been available, it’s clicked most of the time. Panama and Curacao were down games, but the full lineup wasn’t available for the former. The offense has netted 13 goals in the other three games with Pulisic, McKennie, Jozy Altidore and company available.

Mexico has survived with its defense, as well. However, it’s been more porous than the American side. Also, this lineup has generated just two goals in the last two games against two teams ranked outside the top-75.

This is not the same Mexico team that emerged out of a tough group stage at the 2018 World Cup. This is also a very hungry U.S. outfit ready to announce its return to competence.

The pick here is 2-1 to the United States.

The #USMNT Starting XI that will start tonight’s #GoldCup2019 Final vs. ??

READ NEXT: What Happens if the USA Beats Mexico in the Gold Cup Final?