The USA earned $2 million after their 2015 victory in the title match. It is unclear exactly how teams divide the purse money and if the coaching and training staff also receive a portion of the winnings. If the U.S. were to win the World Cup, the money would be about $173,913 per player if it were divided just among the athletes.

By comparison, the 2018 World Cup had a total purse of $400 million, per The New York Times.To put it in perspective, France took home a $38 million check for winning the 2018 World Cup, which is more than the entire Women’s World Cup purse. FIFA president Gianni Infantino recently proposed that the tournament expand to 32 teams and the prize money be doubled, potentially as soon as 2023.

“I want to expand the tournament to 32 teams,” Infantino said, per The Guardian. “We will have to act quickly to decide if we are to increase it for 2023, if we do, we should reopen the bidding process to allow everyone to have a chance or maybe co-host. Nothing is impossible.”

USWNT forward Megan Rapinoe discussed the discrepancy in prize money for the men’s and women’s World Cup. Rapinoe was also not pleased that the Gold Cup and Copa America finals were also on July 7.

“That’s what I mean,” Rapinoe noted to USA Today. “If you really care about each game in the same way, are you letting the gap grow? I’m not saying our prize money is $450 million this time or next time around. I understand that, for a lot of different reasons, the men’s game financially is far advanced to the women’s game. But if you really care, are you letting the gap grow? Are you scheduling three finals on the same day? No, you’re not.”

The USWNT Is Currently Part of an Ongoing Lawsuit Against the U.S. Soccer Federation

The USWNT is currently part of an ongoing lawsuit levied against the United States Soccer Federation that centers around equitable pay. During the World Cup, news broke that the two sides had agreed to mediation. U.S. Soccer released a statement on their “disappointment” that the news was shared during the World Cup.

“While we welcome the opportunity to mediate, we are disappointed the plaintiffs’ counsel felt it necessary to share this news publicly during the Women’s World Cup and create any possible distraction from the team’s focus on the tournament and success on the field,” U.S. Soccer said in a statement,” U.S. Soccer said, per Pro Soccer USA.

Alex Morgan is one of 28 players that are part of the lawsuit. Morgan noted that the group is hoping the lawsuit can impact all industries, not just sports.

“This isn’t just about us; It’s about women in all industries,” Morgan noted to Pro Soccer USA. “Women fight for equality every single day. Our hope is that we not only set up ourselves, we set up the next generation as well.” 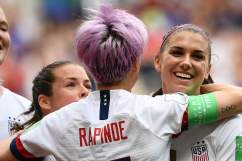