Getty A look at the Nike Off-White shoe collaboration that Brooks Koepka wore during the 2019 Tour Championship in Atlanta.

Dressed in a mostly black colorway, the collaborative sneaker has also been embellished with contrasting white details found on the Swoosh insignias and Off-White™’s signature text branding located on the medial portions. To finish off the pair, the updated AM90s have been re-soled with a grass-ready spiked outsole.

Other than fashion, the zip ties serve another purpose which is the ability to customize other pairs of sneakers. Designer Virgil Abloh explained the thought process behind the design.

“The ultimate idea was that all those extra laces and the zip-ties go to use with all your other pairs of shoes to DIY make your own versions of Off-White™ sneakers,” Abloh tweeted.

Abloh founded the company in 2012 and the fashion style features a bit of irony, per Vox.

Koepka Signed an Endorsement Deal With Nike in 2016

A look at the Off-White signature tags on Brooks Koepka’s shoes.

Koepka signed an endorsement deal with Nike in 2016 and at the time it centered around using Nike clubs. The shoe and apparel company has since stopped making clubs, but Koepka has become one of the new faces of Nike on the golf course.

From floral patterns to hats with vertical Nike text, some of Koepka’s looks have received mixed reviews, but the new Off-White shoes are sure to resonate with a younger demographic of golf fans. Koepka did his research before signing with Nike as he detailed to Golf Channel.

“Rory had a different point of view and in the Bahamas it was nice to pick Tiger’s brain about it,” Koepka noted to Golf Channel. “Everybody had nothing but good things to say about it.”

GettyBrooks Koepka is one of the contenders for FedEx Cup championship.

Heading into the final round of play at East Lake, Koepka is one of the top contenders for the FedEx Cup championship. Koepka noted he was locked in on winning another trophy.

“Yeah, I mean, I’m locked in. I’m locked in on every round,” Koepka said prior to Round 4 in Atlanta. “I don’t see any point in trying to be more focused. I don’t know if that’s possible. But you don’t just go out there like it’s a round with your buddies, either. You just go out there, go focus, and go hit the golf shots you need to hit. And then at the end, total them up, and hopefully you’re there. And if not, then I gave it best, and I’m satisfied with that.” 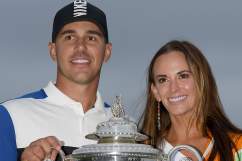