Getty ORLANDO, FLORIDA - DECEMBER 01: Trysten Hill #9 of the UCF Knights takes down Tony Pollard #1 of the Memphis Tigers for a loss of two yards during the first quarter of the American Athletic Championship at Spectrum Stadium on December 01, 2018 in Orlando, Florida. (Photo by Julio Aguilar/Getty Images)

For at least one preseason game, the Dallas Cowboys moved forward without Ezekiel Elliott as the starting running back. Rookie Tony Pollard took his place on the first drive, toting the ball four times and gaining 16 yards.

The 6-foot-, 215-pounder out of Memphis has drawn rave reviews throughout training camp from both management and his teammates.

“Tony Pollard has done a real nice job out there,” Cowboys executive vice president Stephen Jones said, per David Moore of the Dallas Morning News. “He’s getting a little bit of everything. He’s probably one that has stuck out for me if I were going to pick one.”

“One of the most exciting players to me of this training camp,” quarterback Dak Prescott said to NFL.com. “The things that he’s been able to do running the ball, catching the ball out of the backfield. He’s making plays. He’s going to help us out.”

He didn’t record a run longer than six yards, but he helped drive Dallas to an opening field goal in the first quarter. In the second quarter, he gave way to fellow rookie Mike Weber, as well as Darius Jackson. This indicates how highly regarded Pollard is to the Cowboys organization.

While competing for snaps with first-team All-American Darrell Henderson last year, Pollard still managed 552 rushing yards at 7.1 a pop. He also accounted for six touchdowns, but really made his mark as a kick returner. He took 60 returns for 1,949 yards and six scores for the Tigers in his career.

As long as Elliott is prolonging his holdout and Jerry Jones is unwilling to budge, Pollard’s development will be a key of this preseason and early regular season. 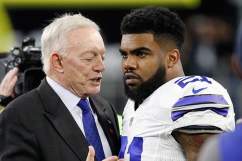 Jerry Jones is not worried about Ezekiel Elliott’s holdout: “You know that it’s a marathon. It’s a long season. It’s a long career. It goes on all the time. You work on this 12 months a year.” Jones added that they have 6-8 contract negotiations going on at all times

Jones continues to show that he is in no rush to sign Elliott to a new contract. He explained prior to Saturday’s matchup with San Francisco that he expects the holdout to last a long time.

Jones has also suggested that you don’t need a league rushing leader to win the Super Bowl, even though that happened twice with Emmitt Smith in the 1990s.

Elliott and his team are prepared for this process to last until the regular season, according to Eric Dickerson on FS1’s “Undisputed.” His client has made clear that he wants a contract that is competitive with Todd Gurley of the Rams or David Johnson of the Cardinals.

“I talked to Zeke’s agent yesterday, and he said, ‘It’s possible. It really is possible he will miss some games.’ He wants to play, but this is business,” Dickerson said. “Zeke’s the best player on that football team. If he misses 4 weeks, I guarantee you they’ll probably win 1.”

Jones may have a bargaining chip if Pollard is able to churn out multiple first downs. With the signings of Amari Cooper last season, Allen Hurns and Randall Cobb thiis offseason and the unretirement of Jason Witten, quarterback Dak Prescott may not need a runner to thrive in this offense.

That’s at least what Jones is hoping for.

Read More
Dallas Cowboys, Ezekiel Elliott, NFL
Tony Pollard started in place of Ezekiel Elliott in the Cowboys preseason opener. See how the rookie out of Memphis did against the 49ers.