A little over a week ago, reports starting emerging that Ezekiel Elliott and the Cowboys would reach an agreement on an elongated contract holdout. On the Friday after the final week of preseason play, Jerry Jones is preparing for the worst.

The Dallas owner talked to Jon Machota of The Athletic Dallas and provided the negative prognosis of the situation.

“I’m operating as though right now he’s going to miss regular season games,” Jones said via The Athletic’s Jon Machota. “My entire expectation for what we’re putting together as a team right now would anticipate with him holding out … that he’s going to miss games. I just accept that.”

Despite trying to play hardball earlier, waxing poetic about Super Bowl champions not needing the league’s leading rusher, his tune has completely changed just days from the regular season opener against the Giants next Sunday.

“He can’t, and won’t miss them all,” Jones said. “We need Zeke. We’re a better team with Zeke.

“He’s a lot of what I’d like to be part of our identity,” Jones said. “And has been. I’ll always remember him jumping in that red kettle. That’s him in that locker room. And of course the player that he is.”

Elliott has two years remaining on his current deal. He is scheduled to make $3.8 million this season and more than $9 million with his 2020 player option. 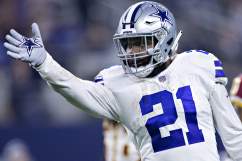 What Elliott Is Still Looking For in His Contract

Jerry Jones Expects Ezekiel Elliott To Holdout Into The Regular Season | Dallas Cowboys NewsThe Ezekiel Elliott holdout drama continues as Dallas Cowboys owner Jerry Jones says he expects Zeke to holdout into the regular season and will not report to the Cowboys in time for Week 1 against the New York Giants. Could this just be Jones posturing against Zeke’s camp and his holdout? After all, as Jerry…2019-08-30T07:00:19.000Z

ESPN’s Ed Werder reported about the potential new contract from the Darlington news:

“Elliott has been offered a contract making him one of the NFL’s 2 highest-paid RB. That would suggest team offering more than LeVeon Bell and less than Todd Gurley,” Werder tweeted.

Elliott has stated that he wants a contract more along the lines of new Jets signee Le’Veon Bell, who inked a four-year deal for $52 million earlier this year.

After last week’s reports, Elliott went hard on those who “undervalue” running backs.

“Until the very recent deal with Todd Gurley [four years, $60 million], I think there was an undervalue of the running back,” Elliott said. “But with guys like Gurley getting drafted so high, then me, and now guys like Saquon [Barkley] getting drafted in the first round, I think we’ve done a great job of bringing back the value of the position, showing the importance of the running back.”

Pro Football Talk speculates that Zeke will play the requisite 8 games for a year to be counted on his contract. Via their story:

“Whether they sign Elliott to a new contract or not, they’ll likely get Zeke in the ‘dog days of the season.” Signed through 2020, Elliott risks tolling his contract for a full year if he doesn’t show up in time to get credit for the fourth year of his five-year rookie deal.’

The Cowboys face the New York Giants in Dallas at 4:25 Eastern time next Sunday on FOX. 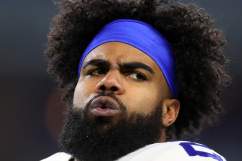 Ezekiel Elliott Will Play Week 1 vs. Giants, Per Report