– CAPTAIN: Chris Hogan ($6,300) – Patrick Mahomes ($11,400) – Tom Brady ($11,200) – Travis Kelce ($8,600) – Sammy Watkins ($6,200) – Josh Gordon ($6,000) Chris Hogan's price is ridiculous. I know he's been mediocre at best this season, but we're looking at a game which has an over/under set at nearly 60 points. Hogan should get targets as he still plays a massive amount of snaps, and logged 91 percent last week against the Colts, per Football Outsiders. And for what it's worth, Hogan did catch 3-of-4 targets last week for 34 yards, so it's not as though Brady just forgot he exists. He's unlikely to see 10 targets, but if he manages to find the end zone it'll jump you above virtually every other lineup as he should have low ownership. Most importantly, using Hogan allows us to get in some huge names with him. For the 150-max game, I'm going to truly go for it. Pairing Tom Brady with Hogan and then Josh Gordon is something I expect very few people to do or even consider. But Gordon's upside is as high as anyone's on this slate if his percentage of snaps continue to increase. Tom Brady's 34-yard touchdown to Gordon last week showed some faith in the receiver, who also received four targets in the game. The thought of pairing Patrick Mahomes with Travis Kelce is something I plan on doing quite a bit in my lineups. The Patriots have allowed 23 receptions for 268 yards and four touchdowns this season to opposing tight ends. Pair that with Kelce's 40 targets over the last four games and the fact that he's hit 100 or more yards in three of those games, and this is a smash spot.

The NFL is conditionally reinstating Patriots wide receiver Josh Gordon following his indefinite suspension, the league announced. According to Jeremy Bergman of NFL.com, Gordon will be permitted to participate in team activities on Sunday should the league find his clinical care and personal arrangements to be effective enough.

Gordon was suspended for violating the league’s substance abuse policy last December. He announced shortly before that he was stepping away from the game to focus on his mental health.

Now that he’s (almost) back, should you draft the embattled wideout on your fantasy football team? It really depends on your faith that he will stick around for all 16 games of the season.

Since his first substance abuse suspension in 2014, Gordon has missed the following chunks of the last few regular seasons:

Let’s assume the 28-year-old remains eligible and healthy throughout the 2019 season. If he sticks to his pace from last fall, Gordon is a potential 1,000-yard receiver for New England.

He snagged 40 catches for 720 yards and three touchdowns. In fantasy terms, he only cleared double-digit points four times per CBS Sports. His best output was a 19-point performance in Week Nine against the Packers, which came from five catches for 130 yards and a score.

Extrapolated out to a full season, these numbers are worth a later round pick. If Gordon continues to not reach the endzone, his points are going to always have a cap on them even if he sees the field for every snap of every game. 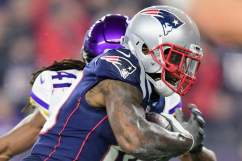 Josh Gordon Contract: How Much Will Reinstated Patriots WR Make?

Chris Towers of CBS Sports makes a good point with Gordon: should he stay on the field, he can replace the lost production of Rob Gronkowski, Chris Hogan and Cordarrelle Patterson.

And, given the efficiency Gordon showed with Brady last season, he won’t need a ton of targets to be productive, especially since he might be the lone true deep threat on the team. Let’s say Edelman gets to 135-140 targets in a full season, and Gordon settles in as the No. 2 option with 125. At last season’s catch and yards-per-target rate, that’s 72 catches for close to 1,300 yards. And, with no Gronkowski around, Gordon is going to look like an awfully enticing red zone option for Tom Brady, so something in the range of nine touchdowns isn’t out of the question.

Overall, Dave Richard of CBS Sports ranks Gordon in the bottom tier of receivers in the league. He even sits behind Patriots first-round pick N’Keal Harry. This is due to his unreliability in terms of playing time.

Zach Brook of NBC Sports Washington projects Gordon as a mid-round selection after the elite receivers get snatched up.

Once the early rounds finish up, however, he possesses the best upside of anyone available.

Would I draft Gordon ahead of up-and-comers like Seattle’s Tyler Lockett or Carolina’s D.J. Moore? Absolutely not.

But would I roll the dice on Gordon ahead of players like Kansas City’s Sammy Watkins or Houston’s Will Fuller V? Without a question.

The consistent drumbeat this offseason is that Gordon wasn’t worth a pick until his suspension went away. Now that his clearance with the league is imminent, he’s an elite talent worth a flier. At the very least, if he’s not generating double-digits consistently, he is a worthy trade asset.