Jon Rahm is a Spanish-born PGA Golfer who is engaged to Kelley Cahill, a former track and field athlete at Arizona State. He is currently in contention at The Northern Trust, the first tournament of the FedEx Playoffs, where he enters Sunday at 12-under par and in third place.

Since turning pro in 2016, Rahm has eight professional victories, including three on the PGA Tour. He entered the week in New Jersey ranked seventh in the world and tenth in the FedEx Standings.

Cahill is a fixture at his matches on the PGA Tour, frequently posting pictures on Instagram of her trips with him. Here’s what you need to know about them and their relationship. 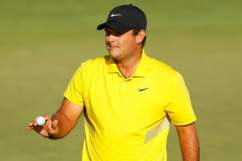 The Northern Trust Purse 2019: How Much Will Winner Make?

1. They Met While Attending Arizona State Together

There aren't many words that I need just Happy Valentine's day darling ❤️❤️❤️❤️ I know this will be the first of many!!! #blonde #love #valentines

According to his PGA Tour profile, Rahm went from his Spanish hometown of Barrika all the way to Tempe (Ariz.) to study communications at Arizona State. While competing for the Sun Devils, he racked up accolades such as the Ben Hogan Award for best amateur golfer in 2015 and 2016.

Meanwhile, Cahill was a javelin thrower on scholarship. Her sophomore year profile in 2013-14 stated that she hails from Portland (Ore.), but her Facebook states more specifically that she’s from Lake Oswego.

The 5-foot-9 athlete sported a personal best throw of 34.92 meters. She competed at a couple of ASU Invitationals and placed second in the PVCC Outdoor in Javelin with a throw of 34.69 meters.

The Express states that the couple met during their studies in Tempe and decided to live with each other immediately after school ended.

“For our relationship, we started dating in college,” Rahm said, per Golf Channel. “We moved in after six months, and we’ve been living together for two years already.”

2. Both Are Athletic Types Who Have Talents in Multiple Sports

Thank you for supporting me out there this week!! #distractions #birdies #noeaglesthisweek #blonde

Tennis Recruiting Network listed Cahill as a two-star tennis recruit after playing at Chaparral High School in Scottsdale, Arizona. She was a senior in 2012 and posted an overall record of 3-6 in her high school tennis career.

Meanwhile, Rahm participated in plenty of sports before settling on golf, including soccer, canoeing, jai alai, and kung fu. Even though he only picked up tennis after meeting Cahill, she states that he’s already picked up the sport.

This has led to some competitiveness between the two.

“He’s killing forehands … crosscourt zingers, and I’m thinking, ‘This can’t be right,’” Cahill told the San Diego Tribune. “…He was so good. I was so upset. I was actually mad for a day or two. We have not stepped foot on a tennis court since…We’ll keep it in our heads that I’m better at javelin. Because if there’s a very slight chance he can throw a javelin, I’ll just lose it.”

3. The Two Got Engaged in June 2018, But Are Taking it Slow on Getting Married

Rahm proposed to Cahill prior to the U.S. Open in June 2018. According to Golf.com, he designed the ring himself, meaning he wasn’t worried about picking anything out.

“I designed it, no. So Brian Stuard’s fiancee or wife is a jeweler and is a really good friend of ours,” he said. “So Kelley was talking to her. She knew what Kelley wanted, but I had my own ideas. Basically, with her help, I designed the ring. She wanted to pick the diamond, but I knew what I wanted. I designed what’s around the ring. It’s supposed to look like a crown and an engraving inside. I had a big part in it. It wasn’t exactly what she wanted, but she loves it. It’s a little more personal like that.”

He continued by saying that he was “100 percent confident she would say yes,” as he stated that “both felt like a married couple already.”

As far as the actual wedding goes, a date hasn’t been released publicly. However, it’s going to be a small ceremony in Spain at first before returning to the States.

“There is [a date we have in mind], but we’re trying to take it slow and keep it pretty small, to be honest,” Rahm explained to Golf.com. “We’re really thinking of doing a small ceremony in Spain just because a lot of my family members can’t fly all the way to the U.S. and vice versa, where a lot of her family members can’t go all the way to the Spain. So, we’re thinking we’ll do something small in Spain and then a couple months later do a ceremony in the U.S.”

NFL combine….sign us up! #nfl #nflcombine

Cahill has shown off her javelin arm on social media before. Rahm posted an Instagram video featuring Cahill rifling a touchdown pass to him at the TCU practice facility.

“NFL combine….sign us up! #nfl #nflcombine,” Rahm noted in the caption.

Later at the Saints facility in Metairie (La.), Rahm threw a pass to Cahill. She caught it without a problem. Despite his ability to pick up different sports, she is the one who appears more physically fit, as she’s frequently posted pictures of her and her impressive physique on social media.

What a great evening at The Ryder Cup gala, such a special event. So excited for the rest of the week! Go #teameurope

At one point, Cahill had over 3,000 Instagram followers on her public profile. However, at some point she made her page private. Now, she has just 518.

Her Twitter page is still public, but she hasn’t posted since Feb. 2018. She still has over 1,000 followers.

The kinds of things she would post on Instagram were of her trips to Rahm to different exotic locations. According to our own Jonathan Adams, those included a New Year’s Eve trip to Spain in 2016 and several tournaments.

Now, the showing off on social media is all on Rahm. He posted a picture at the Ryder Cup Gala in 2018 of him in a tux and Cahill in a stunning blue dress. It took place at the Palace of Versailles.

“What a great evening at The Ryder Cup gala, such a special event. So excited for the rest of the week! Go #teameurope,” he posted in the caption.

Cahill and Rahm continue to be one of the more adventurous and fun-loving couples on the PGA Tour. He’s looking to end his season on a high note in the playoffs, and then presumably get officially hitched soon after. 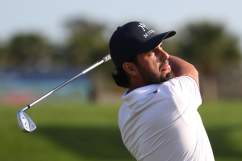