Getty Marreese Speights #5 of the Orlando Magic reacts after a three point shot against the New Orleans Pelicans at the Smoothie King Center on October 30, 2017 in New Orleans, Louisiana.

The Lakers are taking their time in evaluating replacements for DeMarcus Cousins at center. After the 4-time All-Star tore his ACL last week, the immediate names to emerge were Dwight Howard and Joakim Noah.

He added that Los Angeles is considering Gortat, even though the Polish big man is currently overseas. He played for the Clippers last season, averaging five points and 5.6 rebounds a game before getting waived after 47 games.

The “Lakers want a window into physical condition and mindset of a potential addition,” Wojnarowski added about Los Angeles’ diligence in the search process. Howard, in particular, is coming off a season where he played just nine games for the Wizards due to shoulder and gluteal issues. 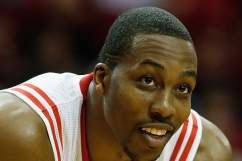 Regarding mindset, this is an incredibly relevant question for both Howard and Noah, who have famously felt tension with the Lakers franchise in the past. Howard unceremoniously flamed out and started his career decline with Los Angeles during their last playoff run in 2012.

“There were some positives,” Howard told Arash Markazi of the Los Angeles Times of his time with the Lakers. “We just didn’t win that season, and that’s what happens when you play basketball. Things may look good, but injuries and other issues may happen and things might not work out, but I still had a good time in L.A.”

Howard acquitted himself well on the stat sheet that season, scoring 17.1 points a game while grabbing 12.4 rebounds per. Noah, on the other hand, has an antagonistic history with LeBron James.

As Brian Yalung of Clutch Points notes, James and Noah clashed during the former’s time with the Miami Heat.

If one goes back a bit, James and Noah have a history of hatred, the Chicago Sun-Times reported. Back in 2009, both players had a heated exchange with the 9th overall pick of the 2007 NBA Draft taking offense to James dancing on the sidelines during a Chicago Bulls vs. Miami Heat game. From there, the dislike built between the two NBA stars.

Speights in an inch shorter than both Howard and Noah, and also hasn’t played in the league since 2017-18 with the Magic. However, the 30-year-old is four to five years younger than Howard and Noah, respectively. He dominated the Chinese league last season for the Guangzhou Loong Lions, averaging 22.7 points (canning over three triples per game) and 7.5 boards a contest.

He has been incredibly consistent in his 10-year career, only averaging less than seven points in two of them. He could reliably stretch defenses with his 35 percent rate from behind the arc, and his 255-pound frame gives him the size to battle underneath the basket.

Lastly, Gortat seems to be a last-ditch option. Bryan Kalbrosky of Hoops Hype noted that the 35-year-old is “no longer in the prime of his career.” Should Howard and Noah fall through, he and Speights would be inexpensive options.

Speights last made just over $2 million for one season with the Magic, while Gortat is due for a steep decline from his $13 million salary from last season with the Clippers. 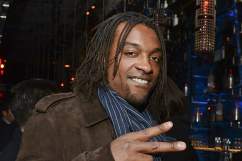 Read More
Dwight Howard, Los Angeles Lakers, NBA
The Lakers have four options at center in their crosshairs, including two new names next to Dwight Howard and Joakim Noah. Workouts are planned for three of them.