Getty Brooks Koepka and the rest of the FedEx Cup contenders will resume play Sunday morning.

The FedEx Cup leaders managed to make it through four holes during the Third Round of the Tour Championship before inclement weather halted play in Atlanta. The presence of lightning along with fan injuries caused play to be postponed until Sunday. Lightning was felt just outside the media tent with rain coming down hard at East Lake Golf Course. The PGA Tour announced that play is suspended for the day and will resume on Sunday, August 25th at 8 a.m. Eastern.

NBC just showed a lightning strike out at the #TOURChampionship at East Lake that injured possibly 4. This is a slow motion shot of their coverage. Wow! ? pic.twitter.com/0Z1ARb6a8q

The PGA Tour confirmed that there were fans injured from the debris of the lightning strike. Here is the PGA Tour’s official statement on the incidents.

At 4:45 p.m., there were two lightning strikes at East Lake Golf Club; a tree near the range/15 green/16 tee was hit, and debris from that strike injured four people.

EMT tended to those fans and two others immediately and transported them from the property via ambulance for further medical attention. Our latest report is that their injuries do not appear to be life-threatening.

Due to these circumstances, the third round has been suspended for the day and play will resume on Sunday at 8 a.m. ET.

“Breaking from East Lake: lightning struck near a fan zone at the 16th hole. At least three people are down, possibly up to six,” Beall tweeted.

Golf writer Rex Hoggard also reported that fans were hit by lightning and taken to an Atlanta area hospital.

“According to official on the scene five fans were injured by a lightning strike at East Lake. All were taken to a local hospital and were ‘alert,'” Hoggard tweeted.

We will continue to update you as more info becomes available for the FedEx Cup playoff. Justin Thomas, Rory McIlroy, Brooks Koepka and Xander Schauffele are among those contending for the championship.

If Weather Permits, the Contenders Will Finish Playing Round 3 Then the Final Round in the Afternoon as Scheduled

Lightening strike at the FedEx cup championship in Atlanta. Hope everyone is ok. #FedExCup pic.twitter.com/gbSFvVJwHO

The top contenders will finish playing Round Three in the morning then carry on with their normal afternoon tee times (if weather permits) on Sunday. It is already a unique tournament given the format change for the scoring. There is now just one leaderboard for both the FedEx Cup and Tour Championship. After Round Two, McIlroy noted the tournament is starting to have a similar feel to prior years.

“Yeah, it does. It feels totally normal,” McIlroy explained. “It feels like a normal TOUR Championship. If you play well, you’re in those last groups every day. Yeah, it does feel normal. I think after the sort of start yesterday and sort of seeing where everyone ended up after day one, today felt just like the second round of a golf tournament, and most of the guys shot very low first rounds.” 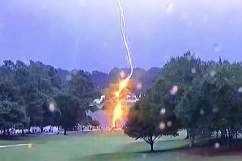