The latest rumors have Deshaun Watson linked to potential girlfriend Jilly Anais. Black Sports Online reported that Watson is dating Anais and the two were spotted together in September at the Texans quarterback’s birthday party. It is important to note that Watson has not confirmed these rumors.

Anais previously dated Spurs guard Dejounte Murray before their very public breakup. Earlier this year, Watson had been linked to Ashley Marie, something that the quarterback also did not comment about. The rumors started to heat up after Marie posted photos of her trip with Watson to the 2019 Pro Bowl to her Instagram Story, per Sports Gossip. One week later Marie was posting pictures with Watson in Atlanta for the Super Bowl festivities.

Marie has quite the social media following where she frequently posts photos of her modeling work. Marie has more than 18,000 followers on Instagram. Anais is a model and actress with more than 2.8 million followers.

Marie has been posting photos on Instagram of her work during New York Fashion Week.

Marie was the first relationship rumor we have heard since Watson entered the NFL, and he was linked to Dallas Robson during his college days at Clemson. As Marie participated in Fashion Week, Watson is starting the 2019 NFL season. Coming off a 2018 playoff run, the Texans have high expectations for the upcoming season.

Watson is known for his calm demeanor, and it is something that has helped the Texans quarterback have success early in his career. Texans head coach Bill O’Brien noted that the quarterback seems the same every day.

Watson missed more than half of his rookie season as he recovered from an injury, but played in all 16 games in 2018. Watson threw for 4,165 yards, 26 touchdowns and nine interceptions while completing more than 68 percent of his passes. The Texans quarterback also added 551 rushing yards and five touchdowns on the ground.

… we goin’ UP there, best believe that!

Watson is coming off a stellar sophomore campaign, but the Texans quarterback noted that he does not feel the pressure. Watson noted that he finds the best way to have success in the NFL is to treat the game the same way he did in high school.

“I never put pressure on myself,” Watson said, per ESPN. “This is football. Football is what I’ve been doing my whole life. The only difference is, of course, it’s the best athletes and I’m getting paid for it. But if I treat it just like I was in high school, where I’m just having fun, doing what I’m doing, preparing like I’m preparing and go out there and perform like I’ve been performing, then everything else is going to work out on its own. 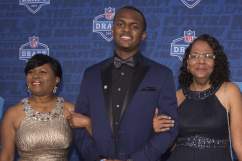