Getty The Jets are down to third-string quarterback Luke Falk.

Things went from bad to worse for the New York Jets as the team is now down to their third-string quarterback Luke Falk after backup Trevor Siemian left the game with a leg injury. The Jets depth chart now only consists of one quarterback with Siemian and Sam Darnold both sidelined. Le’Veon Bell is the backup quarterback for the rest of the Browns game, per ESPN.

“Trevor Siemian is officially ruled out with an ankle injury. Le’Veon Bell is now the Jets backup QB in case Luke Falk gets injured,” ESPN tweeted.

Siemian sustained the injury in the first half on a big hit from Browns defensive end Myles Garrett who was called for a roughing the passer penalty. With Darnold out with mono, the Jets now only have one healthy quarterback on the roster.

Falk was just promoted to the active roster this week after Darnold was ruled out. While the team has not announced Siemian’s injury, the replay did not look good and the quarterback limped to the locker room right after the play.

The Jets Are Down to Just 1 Healthy Quarterback

Oh man that is painful looking for Trevor Siemian. pic.twitter.com/6tm5IWZv6s

We can expect the Jets to add another quarterback before Week 3 if Siemian is forced to miss time. Fox Sports’ Jay Glazier reported that Week 4 was the soonest Darnold could return to play as his recovery requires a minimum of 21 days.

“Sam Darnold told me last night he feels much, much better and says he hopes docs let him rejoin his team this week. Says doc told him he has to take 21 days to recover and as a result hoping he comes back after the bye Week 4. Says he hasn’t lost much weight at all,” Glazer tweeted.

Luke Falk Threw for More Than 14,000 Yards at Washington State

Falk was selected in the sixth round of the 2018 NFL draft by the Titans. The quarterback had a standout college career at Washington State. Falk’s best season came his sophomore year when he threw for 4,561 yards, 38 touchdowns and just eight interceptions.

Washington State now has two quarterbacks seeing significant playing time after starting the season as a backup or third-string quarterbacks. Prior to the draft, NFL.com’s Lance Zierlein described Falk’s ceiling as an “average starter.”

Tall, rhythm passer with good natural accuracy and years of quality production who is much more comfortable working the perimeter and against man coverage. Falk’s lack of protection and average mobility has lead to a tremendous amount of sacks and quarterback hits that may have taken a toll on him. While he can throw with touch and accuracy, his deep and intermediate accuracy dipped this season. There are some holes that could be hard to correct in Falk’s game and “average starter” may be his ceiling.

Fans can expect the Jets to add another quarterback sooner rather than later. The soonest Darnold can return is Week 4 and there is no guarantee he will be fully recovered by this point. 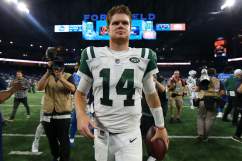 Read More
New York Jets, NFL
What quarterbacks do the New York Jets have on the roster? Learn more about the Jets QB depth chart and why the team is down to one quarterback.