The Chicago Bears lost their starting quarterback Mitchell Trubisky after he left the game against the Minnesota Vikings on Sunday during the team’s first offensive series. Trubisky suffered a left shoulder injury early in the first quarter, and after spending some time in the blue medical tent, Trubisky went back to the locker room and was ruled out before the first quarter was over.

ProFootballDoc.com’s Dr. David J. Chao said he believed the injury was “significant” after the game. Chao said that while Trubisky’s left shoulder may require surgery, Trubisky could still play with a sling and get surgery in the offseason. While the injury is significant, it’s not thought to be season-ending.

#MitchTrubisky @ChicagoBears
Significant left shoulder injury.
See why he is unlikely to return today and what it means going forward at https://t.co/dFDT8os6QG pic.twitter.com/NDj2YZUS1n

Trubisky was injured on a play in which he was sacked while running to the sidelines, and you can see his left arm get caught behind his head as it slams on the ground following a near-fumble, per NFL analyst Dov Kleiman.

Bears backup Chase Daniel came in and played efficient football in Trubisky’s absence, going 22-30 for 195 yards and a touchdown. Daniel didn’t have a turnover the entire game, a statistic that shouldn’t be overlooked. So how serious is Trubisky’s injury, and how long will the Bears starting quarterback be out?

How Much Time Will Mitch Trubisky Miss? 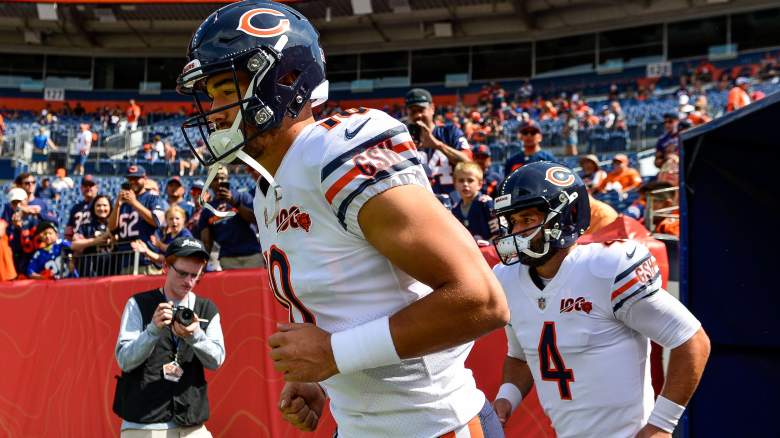 Bears Coach Matt Nagy said postgame that he didn’t have any information on Trubisky’s injury other than it was his shoulder, and that he should know more in a day or two.

On Monday, Ian Rapoport reported that Trubisky was undergoing tests on his left shoulder, and that the Bears quarterback would be doubtful for next Sunday’s game against the Raiders.

#Bears QB Mitch Trubisky is having tests on his left, non-throwing shoulder as we speak, and it’s doubtful that he plays this week in London against the #Raiders. The team will learn today if he’s able to come back after the bye and what his timetable is.

Adam Schefter later reported that Trubisky’s MRI revealed that he has a dislocated left shoulder, with a slight tear of his labrum, and will likely be back “sooner rather than later.”

Initial MRI on Bears’ QB Mitchell Trubisky revealed he has a dislocated left shoulder, with a slight labrum tear, but does not need surgery and should he back “sooner rather than later”, per source. He will travel with team to London and is unlikely to play vs. Raiders.

Bears head coach Matt Nagy, addressing the media Monday afternoon, offer no new information on Trubisky’s injury. Nagy said he didn’t know as much, and half-joked that NFL insider Adam Schefter seems to know more than he did at that point, only saying that he felt the team would know more about Trubisky’s injury later in the week. He wouldn’t officially rule Trubisky out for Sunday’s game in London against the Raiders, saying the team was “working through it.”

Matt Nagy asked if Mitchell Trubisky has been ruled out for Sunday: "Well, we’re working through it.”

David J. Chau also echoed Schefter’s report of a dislocated shoulder, adding that he felt Trubisky would be back in action soon.

Trubisky’s status for Sunday’s game against the Raiders was finally revealed by Matt Nagy Wednesday afternoon, however: while Trubisky will travel with the team to London, he won’t play.

This means we’ll be seeing Bears backup Chase Daniel at least another week. Daniel went 1-1 when performing backup duties last season, and the players and head coach Matt Nagy trust him. The Bears play the Oakland Raiders in London next Sunday, and then Chicago has its bye week following that.

Read More
Chicago Bears, Football, NFL
Chicago Bears quarterback Mitchell Trubisky is recovering from a left shoulder injury His status against the Raiders has been revealed.