Rams head coach Sean McVay and longtime girlfriend Veronika Khomyn got engaged over the offseason. It was not all bad news for McVay after the difficult Super Bowl loss as the Rams coach used part of the summer to propose. McVay popped the question while the couple was vacationing in France, per People.

The couple started dating in 2011 when McVay was an assistant for the Redskins and Khomyn was a student at George Mason University. Khomyn announced the exciting news via an Instagram Story. After developing quite a social media following, Khomyn has since turned her Instagram account to private.

While the Rams season did not end the way McVay would have liked, the coach told NBC Sports’ Peter King that this was the best offseason he ever had. McVay took trips to Cannes and Italy’s Amalfi Coast, per NBC Sports.

“Best I’ve ever felt going into a season…I slept better,” McVay told NBC Sports. “I was able to kinda just unplug. I think that created a renewed sense of energy and enthusiasm.”

No word yet on a wedding date, but it is a safe bet that it will be during one of the football offseasons. It looks like the Rams head coach spared no expense when it came to the engagement ring.

Veronika’s Engagement Ring Is Estimated to Have Cost at Least $100,000

Brilliant Earth’s VP of strategy and merchandising Kathryn Money discussed Khomyn’s ring with Page Six, noting that it likely came with a high price tag. Money estimated that the ring cost between $100,000 and $150,000.

“Veronika’s showstopping ring appears to feature an emerald-cut diamond in a three-stone white gold or platinum setting with tapered baguette diamond accents,” Money explained to Page Six. “Depending on the quality and specific characteristics of the diamond, we estimate the cost of the ring to be between $100,000 and $150,000.”

The couple’s relationship dates back to long before McVay got his big opportunity to be the youngest NFL head coach. McVay and Khomyn were together when he was an assistant in Washington. It was Khomyn that ended up clearing out their old Virginia home after McVay accepted the Rams job, per Sports Illustrated.

After McVay, the former offensive coordinator in Washington, got the Rams job on Jan. 12, he planned on returning to his Reston, Va., townhouse to gather his things. But there was too much to do in California. So Veronica and a few friends took care of clearing the townhouse, and it sold in a day. McVay never made it back.

Veronika Maintains an Instagram Page for Their Dog Kali

Despite being the youngest head coach in NFL history, McVay is not on social media, but his fiancee remains active on Instagram. Khomyn may have set her account to private, but she maintains a page for their dog Kali.

The dog’s latest post features Kali overlooking the Los Angeles skyline. Other posts include a lot of napping and a few hikes with Khomyn. 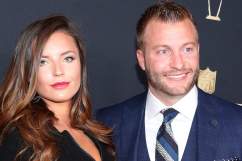