Many fantasy owners believed they were getting a steal late in drafts with Tony Pollard, but the rookie running back’s value is a bit more complicated after Ezekiel Elliott agreed to a new deal. Elliott’s new contract extension means the Cowboys running back’s holdout is over and Pollard’s role is drastically reduced.

With the recent news, should you drop Pollard from your fantasy team? Pollard is still worth holding onto in most league, but I have my doubts that he is going to prove fantasy relevant with Elliott back with the team. The Cowboys noted after drafting Pollard that they envision him having a role, so you should wait to see how Dallas utilizes the new back before sending him to your waiver wire.

“Stephen Jones says Tony Pollard is a guy who could wind up “getting 30 plays” in a game,” WFAA’s Mike Leslie tweeted after the Cowboys selected Pollard.

Tony Pollard Is a Sit Week 1 vs. Giants

Without Elliott, Pollard was a definite Week 1 start, but now he belongs on your bench until we see how the Cowboys use both backs. There is a chance both prove to be fantasy relevant, but there is a reason the Cowboys just gave Elliott a massive contract extension. The Cowboys have tended to feed Elliott the football early and often.

Pollard is still worth rostering to see if the Cowboys do indeed use Pollard in a passing-downs role. Prior to the news, Pro Football Focus projected Pollard would rush for 225 yards and two touchdowns while breaking down the two backs.

The assumption is that Elliott will return at some point, leaving him and Pollard to work their magic in what could be one of the league’s more dynamic backfield. The football world is well aware of what Elliott is capable of from a production standpoint — he had the most carries (304), the most yards (1,434), the most first-down rushes (71) and the most runs of 10-plus yards (41) in 2018.

But with the running back position proving to be as fluid as ever across the NFL, Pollard could slot in seamlessly. It’s unlikely that the rookie would put up numbers anywhere close to Elliott’s line from 2018, but he does offer one novelty: ball security.

Explore Trade Opportunities for Pollard Before the Season Starts

The Pollard hype train was gaining full steam during Elliott’s holdout. Pollard’s trade value takes a significant hit with the recent news, but there might be someone in your league willing to trade for the Cowboys running back.

There are plenty of other rookies that I would rather have than Pollard including Devin Singletary and DK Metcalf. You should send out a few offers with Pollard before the season starts to see if you can get anything in return for the rookie back. 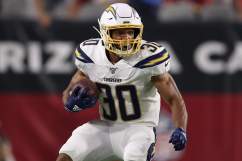