The Kansas City Chiefs may soon be forced to have their depth as a team tested. The Chiefs just lost their first game of the season to the Indianapolis Colts Sunday night, and during the game, their MVP All-Everything quarterback Patrick Mahomes re-injured his left ankle after his own offensive lineman, Andrew Wylie, accidentally stepped on it.

Neither Mahomes nor head coach Andy Reid seems to think the injury will cause t quarterback to miss any playing time, despite his obvious limp during the game.

“I just re-aggravated it a little bit there in the first half and then it got stepped on in the second half,” Mahomes said after the game. “For me, it’s going into treatment and getting it better so I can be prepared for next week.” Mahomes also noted that he was going to find a way to finish the game, regardless of how his ankle felt.

This determination by Mahomes to play is understandable, laudable and expected. But it’s a slippery slope the Chiefs are walking, and fans and media surrounding the team are currently divided as to whether Mahomes should continue to play or rest it a few weeks.

I might not send Mahomes to Denver, if I'm the Chiefs. Need to find a way to get that dude's ankle some rest. Certainly doesn't help that Stone Cold Jones is also out now.

Put me SQUARELY in the "Rest Mahomes If He Needs It" camp. I know it's bad for business. I know he's competitive. l know you can tape that ankle and blah blah. But if 4 weeks of Matt Moore gives me MVP mode again 1 month from now, I'll take that trade. https://t.co/5pwlw7QWSc

The Chiefs Don’t Have a Strong Backup Quarterback 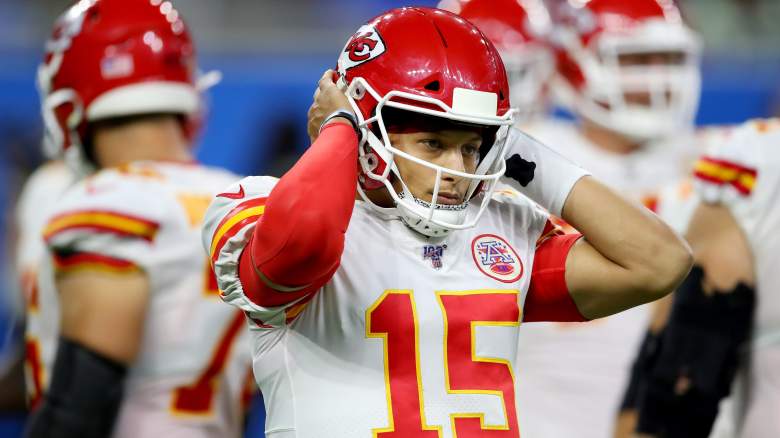 GettyKansas City Chiefs quarterback Patrick Mahomes is planning on playing through the injury.

Matt Moore, the Chiefs’ 35-year-old backup quarterback, hasn’t played in an NFL game since 2017. Moore has well over a decade of NFL experience, but he’s nowhere near as capable in this offense as Mahomes, which is obvious. But that doesn’t mean he should continue to sit on the bench if Mahomes’ ankle doesn’t mend or only gets worse.

Injuries like the one Mahomes is currently battling tend to linger. While the Chiefs are certainly better with him under center, they don’t want to make a bad situation worse. Mahomes had the second lowest completion percentage of his career (54.6%) Sunday night while playing on that injured ankle, and several Chiefs fans and beat writers are growing concerned that the sore ankle could be hindering Mahomes’ overall performance.

Yeah, Mahomes didn’t look right for much of the game after re-injuring that ankle. But the defense took advantage of it by constantly pressuring him and not allowing him to sit in the pocket and throw. Major credit.

Adam Vinatieri hits his third field goal of the night, this time from 31 yards out, to put the Colts up 16-10 with 7:40 left in the fourth quarter.

Patrick Mahomes has a bum left ankle. Can he keep escaping the pocket and making plays?

Chiefs gotta sit Mahomes. It's obvious his ankle hurting him. He out here throwing ducks.

Mahomes Has Made it Known He Will Continue to Play 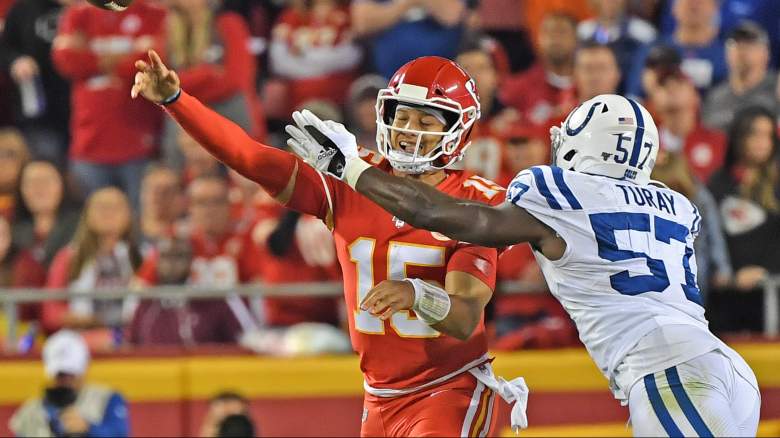 The Chiefs don’t have their bye week until week 12, which is over a month and a half away. Whether or not their talented young star can continue to play at the level to which he’s accustomed on one good ankle is anyone’s guess–but he’s set on trying.

The Chiefs play another dynamic young quarterback, Deshaun Watson, and the Houston Texans next week, and Mahomes absolutely will play. But how well his sore ankle holds up over the next few weeks–much less until the bye week–remains to be seen.