Justin Verlander’s wife, Kate Upton, and their daughter, Genevieve, are hoping that the Astros pitcher can close out the World Series in Game 6. As the series heads back to Houston, fans can expect to see Upton in the stands cheering on Verlander in a potential close-out game. Upton has been a regular at Astros games during the postseason even when Verlander is not on the mound.

During the Astros ALDS matchup against the Rays, Verlander was seen waiving to Upton and their daughter in the stands. The cute moment instantly went viral as his two favorite ladies cheered him on in the stands.

JV waving to his wife Kate & daughter is the most adorable thing you’ll see today.

Upton Has Been Cheering on the Astros Throughout the Postseason

WORLD SERIES BOUND!!! So proud of you @justinverlander!! ?? CONGRATS ASTROS!!

Upton has been enjoying the Astros success throughout the playoffs and is hoping the team can pull out one more victory in October. Upton’s latest social media posts have all been about the Astros. She took to social media to congratulate the Astros on making the World Series.

“WORLD SERIES BOUND!!! So proud of you @justinverlander!! ?? CONGRATS ASTROS!!” Upton posted after the ALCS.

The model also had a bit of fun with Gerrit Cole’s wife, Amy Cole, during one of the playoff games. Upton and Cole recreated the Sports Illustrated cover that their husbands had done prior to the postseason.

Here is a look at the photo Upton posted along with the original cover.

Prior to ALDS Game 4 against the Yankees, Upton posted an adorable photo of their daughter decked out in a custom jean jacket made to look like Verlander’s Astros jersey.

So grateful for the support we received for @winsforwarriors, thanks again to all of our friends and family who were extremely generous with their time and contributions to our mission! #ThankYou #WinsForWarriors

Verlander hit a low point after needing shoulder surgery and feared his career could be done. During a 2018 interview with Bleacher Report, the pitcher admitted to battling depression and noted Upton kept him from “jumping off a bridge.”

“She was instrumental in me not…like, jumping off a bridge,” Verlander explained to Bleacher Report. “I was depressed and kind of just upset at the world and trying to hide my own s—. F—, man. She was what I needed…I don’t like to talk to people about being hurt. As athletes, you’re not supposed to. It’s an excuse. … But she was someone I could talk to. I mean, basically a therapist. Somebody I could trust with … worries about my career. Worries about, Can I make it? Worries about what I’m going through to get back. And just the overall [explitive] of it all.”

Earlier in his career, Verlander found out he needed sports hernia surgery, and Upton was the first person that visited him. The couple bonded over playing board games as Upton detailed to Bleacher Report.

“That’s probably where I’m most comfortable,” Upton told Bleacher Report. “Playing board games and joking around and just hanging out is kind of what I love doing.” 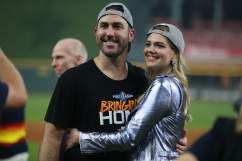