It has been an eventful summer for Lonzo Ball and not just because he was traded from the Lakers to the Pelicans. Lonzo and his father, LaVar Ball, have had a bit of a public feud over Big Baller Brand.

The Pelicans guard insists the two have squashed their beef heading into the NBA season. Lonzo discuss their supposed feud on the Lightharted Podcast noting “we squashed it,” per USA Today.

It’s all good. We got into it, me and my dad, but we cool now — we squashed it. It’s always going to be a family brand regardless of whether I go to Nike, or Adidas, or anybody, but I would love to stay. But I’ve got family now I’ve got to look out for and if it’s not ran the way I want it to be run and not doing what I want it to do, then I’ve got to move on.

Lonzo explained his preference is to be back with Big Baller Brand, but has also left the door open to signing with another shoe company. LaVar has disputed his son’s own words insisting he will remain with the family brand.

“Lonzo can think all day,” LaVar noted to TMZ. “He ain’t signing with nobody. Big Baller Brand. That’s what I said.”

“That’s like me telling you to change your name. … ’Change Lonzo’s name to Alfonzo on the fact that he’s been damaged goods for the last two years.’”

—LaVar to Lonzo as they disagree on what's best for Big Baller Brand going forward. (via @ballinthefamily) pic.twitter.com/4a47hOD8ga

Lonzo and LaVar are part of a docu-series entitled “Ball in the Family.” A September episode showed the two arguing over whether Big Baller Brand should change the name after the recent controversy. After Lonzo suggested they change the name of the company, LaVar called his son “damaged goods.”

“That’s like me telling you to change your name. … ’Change Lonzo’s name to Alfonzo on the fact that he’s been damaged goods for the last two years,’” LaVar said on the show, per ESPN.

During an interview on ESPN’s Adrian Wojnarowski’s podcast, Lonzo has since downplayed LaVar’s comments noting that it was just part of their father and son relationship.

“That’s part of life,” Lonzo said, per Sports Illustrated. “I’m growing up. He has his ways, I have mine. We just got into it. That’s what fathers and sons do as time goes on. At the end of the day, it’s always love at the end. I know he loves me, I love him. We’re just not always going to agree on everything. That’s all it was.”

Covered up “BBB” Tattoo Today, Roll with the Winners ? @Zo

Lonzo may be downplaying the family feud but there has obviously been some animosity between the two parties. The Pelicans guard previously had the “BBB” logo tattooed on his arm, but artist Herchell Carrasco posted a photo back in March of the covered up ink. Lonzo replaced the Big Baller Brand logo with dice. 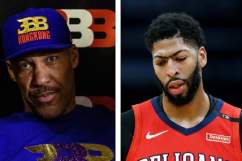