Getty Paul George is likely to miss at least the first month of the NBA season.

Paul George’s injury will keep him out for the start of the Clippers season. George admitted to ESPN’s Ramona Shelbourne that he had surgery on both shoulders which created a bit of news as most fans only knew about the one procedure. The Clippers have not released an official timeline, but George noted he was targeting a November return.

“I’m where I want to be right now at this point in the season almost starting,” George told ESPN in a September interview. “I like where the progression is going…I will be out of the preseason. As of now, I’ll be out of October fully, but who knows? We’ll see. In the November range is our target date.”

“Clippers haven’t given a concrete timetable on Paul George’s return. But Doc Rivers said in passing that Paul George ‘is not going to be here for the first 10.’ Hence, George might be out until Nov. 13 in Houston,” Medina tweeted.

After a few hiccups during his career, George has played in at least 75 games in three straight seasons. This streak is likely to come to an end this season, but the Clippers are eying George’s long-term health.

How both Kawhi Leonard and George landed with the Clippers may only be fully known by the two stars. What is widely agreed upon is that George requested a trade from the Thunder front office. Leonard’s role in helping the Clippers land George is the part that has conflicting reports. The Athletic’s Shams Charania reported that a source said it was “not accurate” that Leonard recruited George.

But on July 3, the Clippers received word that George wanted out of Oklahoma City and Leonard had been recruiting George to ask for a trade to team up with him and the Clippers. There are conflicting accounts on Leonard’s involvement in recruiting George. For the record, it should be stated that a source told Charania that it is “not accurate” that Leonard recruited George to demand a trade and come to the Clippers.

According to ESPN, Leonard previously recruited Kevin Durant to join him with the Clippers but later turned his attention to George. Shelbourne noted that her source called Leonard “a hell of a recruiter” when it came to landing George on the Clippers.

Said one source close to George, “For a quiet guy, he’s a hell of a recruiter.”

For George to join Leonard with the Clippers, however, he’d have to ask for a trade from Oklahoma City — and that wasn’t going to be pleasant, considering the way the franchise had treated him in the two seasons he’d played there and the bonds that he’d formed.

But George felt like it was a once-in-a-lifetime opportunity, to play at home in L.A. alongside a generational talent like Leonard.

However it happened, Leonard will have to wait at least a few more weeks to team up with his new All-Star teammate. 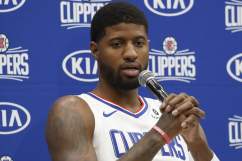 Read More
Basketball, Los Angeles Clippers, NBA, Paul George
What happened to Paul George and when will the Clippers star return to play? Find out the latest PG injury updates and his projected return timeline.