Getty Zion Williamson could miss the first two months of the NBA season with a knee injury.

Zion Williamson’s injury will cause the No. 1 pick to miss the start of the season with the Pelicans. Williamson sustained a torn lateral meniscus meaning the big man is dealing with a knee injury.

The Pelicans Denied Williamson’s Injury Is Related to His Weight

The Pelicans are unsure when Williamson sustained the injury during the preseason. New Orleans GM David Griffin shot down the notion that the injury is in any way tied to Williamson’s weight of 284 pounds.

“The notion that this happened because Zion is in poor condition is asinine,” Griffin explained to ESPN. “He wasn’t in poor condition when he went 12 of 13 last week against Utah. That’s not what it is. He’s just a very unique body type and certainly from a physics perspective.”

Williamson’s injury is unique in that he did not experience immediate discomfort and the rookie did not let the Pelicans know about the injury until October 15 which is two days after the Pelicans-Spurs game, per ESPN. Williamson underwent an MRI on October 17th which revealed the torn meniscus.

Williamson has yet to play an NBA regular season game, but the big man has already sustained multiple knee injuries. Williamson suffered a bruised left knee in the first game of Summer League and ended up missing the remainder of the Las Vegas games.

Williamson’s latest injury is to his right knee, so the opposite leg that caused him to miss time this summer. Griffin tried to squelch speculation that there should be concern around Williamson’s long-term health, but admitted that the rookie has a unique frame that the team is learning to manage.

“Less weight, less torque is a theory,” Griffin noted to ESPN. “But you look at a player like Blake Griffin who generated enormous torque and had the issues he had in his career. It took a while for him to find stasis in his body and we think that could be the same with Zion…Sometimes our job is to protect guys from themselves. So we’ll see how he goes through the process, but all the indications are very positive.” 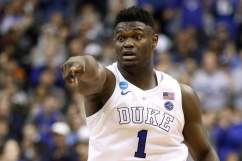 Zion Williamson’s Salary: How Much Money Will He Make on NBA Contract?

Read More
Basketball, NBA, New Orleans Pelicans
What happened to Zion Williamson and how much time will the Pelicans star miss? Find out the latest updates on Zion's injury and when he will return to play.