Getty There are plenty of good plays on FanDuel to feed your Thanksgiving DFS appetite.

Playing DFS on Thanksgiving is a tradition unlike any other, and we are here to walk you through your best NFL FanDuel lineup for the holiday. With just three NFL games on Thanksgiving, the player pool is narrow making each selection even more important.

As a reminder, your lineup’s risk level should vary based on the size of the contest you are entering. If you are looking for a winning lineup in the NFL Thanksgiving Million contest, it needs to have players that are not going to be highly owned. For cash games where 50 percent of the lineups get paid, your picks should be much safer with players that have high floors.

Before we get into specific plays, let’s take a look at how each team’s defense stacks up which can help us fill out a winning lineup. The Lions have the worst passing and run defense of any team playing on Thanksgiving. Detroit ranks 30th against the pass and 24th versus the run as the unit is giving up a lot of yards.

Chicago has the best overall defense of any team playing today with the sixth-ranked rushing and ninth-best unit against the pass. The Saints also have a solid defense with the fourth-ranked rushing defense and 15th versus the pass. If you are choosing between two players, take a look at the matchup and use it as a tiebreaker.

GettyJosh Allen has been a solid fantasy quarterback in 2019.

Dak Prescott is my top quarterback play as he represents the QB with the highest upside given his rushing ability. Josh Allen is a close-second for similar reasons and may be preferable in tournaments given Prescott’s likely ownership percentage. Allen is worth the risk in large tournaments given his high upside.

The Falcons and Saints matchup is projected to be the highest-scoring game, but neither quarterback performed well in fantasy when the teams squared off two weeks ago. If forced to pick between Matt Ryan and Drew Brees, I am leaning on the Falcons quarterback given he is $800 cheaper than his counterpart. If you are filling out multiple lineups, you would be wise to sprinkle in a mix of these three quarterbacks and even Mitch Trubisky who should have a solid game against a poor Lions defense.

GettyDFS players may have to choose between Ezekiel Elliott and Alvin Kamara.

It is hard to go wrong with Ezekiel Elliott and Alvin Kamara in your lineup. The challenge is there is going to be a lot of people with these two backs. Devin Singletary is my favorite rusher for Thanksgiving as he is finally getting the majority of carries in the Bills backfield. Singletary rushed for more than 75 yards in the last two games but has not found the endzone since November 3rd. Look for that to change in Dallas given you a little more value than the two chalk running backs.

If Devonta Freeman is active, he is player I like a lot even though the Saints’ rushing defense is good. Freeman has been Ryan’s security blanket all season long and will still get touches in the passing game. Tarik Cohen is another good play in tournaments thanks to his high number of receptions.

GettySaints WR Michael Thomas has been a monster this season.

As the Saints-Falcons game comes on during primetime, I can imagine some of us may be on our second slice of pie. Michael Thomas and Julio Jones are not only the top two receivers playing on the holiday, but two of the best pass catchers in the NFL. Jones is dealing with a shoulder injury which concerns me a bit, and I would select Thomas given his consistency if I am choosing between the two players.

Don’t sleep on Allen Robinson who has been the Bears only consistent receiver this season. It also helps that Robinson gets the 30th ranked passing defense in Detroit.

My favorite receivers to use on Thanksgiving are Calvin Ridley, Cole Beasley and Randall Cobb. All three receivers are trending up for different reasons. Beasley makes his first appearance back in Dallas and nothing says revenge like having a monster game against your former team on Thanksgiving.

Allen has been looking to get rid of the ball quickly and often relies on Beasley in the slot. It is hard for me to imagine the former Cowboys receiver not performing well. Cobb has had 10 or more fantasy points in three straight contests. With Amari Cooper battling an injury, look for Prescott to continue relying on Cobb against the Bills.

Finally, Ridley is poised to be the Falcons’ top receiver with Jones’ health up in the air. Ridley has 14 receptions for 228 receiving yards and two touchdowns over the last two games.

Jared Cook & the Bears DST Are the Favorites

GettyJared Cook is the only safe tight end pick on Thanksgiving.

Jared Cook is the only reliable option today at tight end, but this also means he is going to be widely owned. If you are looking for variance, T.J. Hockenson and Dawson Knox represent good options as lottery ticket plays. Just be sure to check the injury report while you are putting the turkey in the oven to confirm Hockenson is active against the Bears.

The Bears not only are the best defense playing today, but have a prime quarterback matchup against Jeff Driskel. The Lions quarterback is dealing with an injury, so there may be a mystery Detroit QB taking the field for the Lions. Dallas represents another good option if you are looking to get away from the crowd at the DST spot.

Here are my best value plays on FanDuel if you are trying to fit players like Michael Thomas, Ezekiel Elliott and Alvin Kamara in your lineup. 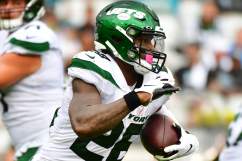