A s fallout continues from the Browns-Steelers brawl, Pittsburgh Steelers center Maurkice Pouncey appealed his three-game suspension this week, and the NFL has just made its ruling on the matter.

Pouncey was suspended for three games following the major fisticuffs that occurred between the Steelers and Cleveland Browns last Thursday night. Whether it was the way Browns defensive end Myles Garrett took Steelers quarterback Mason Rudolph to the ground or the way Rudolph responded by trying to pull Garrett’s helmet off that started it all remains a topic of hot debate. What happened next was unprecedented.

Garrett took Rudolph’s helmet off and hit him in the head with it. Chaos soon followed. Pouncey rushed to defend his quarterback, punching Garrett multiple times and kicking him when he was held on the ground by Steelers offensive lineman David DeCastro. Browns defensive tackle Larry Ogunjobi also entered the fray, and received a one-game suspension by the NFL along with a fine for shoving Rudolph to the ground while he wasn’t wearing a helmet.

Garrett was suspended indefinitely; he appealed his suspension on Wednesday, and will likely hear from the league by week’s end. Pouncey was suspended for three games, and his appeal was held on Tuesday. Many people praised Pouncey for defending his quarterback, including Hall of Famer Deion Sanders, who said Pouncey should be fined, but not suspended. Sanders also called Pouncey “a hero:”

Just so yall know that inside a @nfl locker room @MaurkicePouncey is a hero. He protected his QB and he was willing to risk it all for his teammate. Ain't many dogs like that left in the game. He should be fined but no Suspension for Pouncey. That's a REAL TEAMMATE! @nflnetwork

Per Dan Graziano of ESPN, Pouncey was joined by a Steelers representative (who joined via phone) in a show of support for his appeal on Tuesday. Graziano said the Steelers were peeved about the three-game suspension because they felt it was intended to keep him out of the team’s Week 13 rematch against the Browns:

Source says a Steelers representative joined Maurkice Pouncey's appeal hearing by phone Tuesday in support of the player. Per source, Steelers are upset because they think Pouncey got more than one game so as to keep him out of Week 13 Browns rematch.

Ogunjobi was suspended by the league for one game, and he also appealed. The NFL upheld his suspension, but they did rescind the fine of $10,527 he received for the incident. Several other players were also fined for leaving the bench during the incident. Rudolph was fined, and while many felt he deserved a suspension for his role in the fight, the Steelers quarterback was not suspended.

Maurkice Pouncey Appeal: How Did the League Rule? 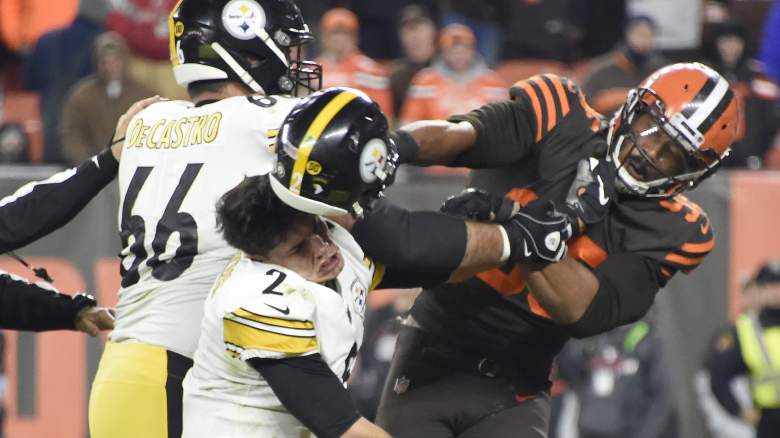 It was announced Thursday that the league reduced Pouncey’s suspension by one game to just two games, per NFL Senior Vice President of Football and International Communications, Michael Signora. The league also upheld Pouncey’s fine of $35,096.

Appeals officers Derrick Brooks and James Thrash, jointly appointed by the NFL and the NFLPA, have reached their decisions on the discipline appeals for Myles Garrett and Maurkice Pouncey. pic.twitter.com/xfLpiHpVBc

Pouncey will still miss the rematch between the Browns and the Steelers in two weeks. Myles Garrett, who also appealed his suspension, remains out of football indefinitely after his suspension was upheld by the league. Garrett can apply to be reinstated after the 2019 season ends, but he won’t see action prior to that.

Myles Garrett’s suspension is upheld. He is suspended for the remainder of this season and postseason and can apply for reinstatement when the season ends.