Getty Matt Ryan of the Atlanta Falcons and Drew Brees of the New Orleans Saints faced off on Thanksgiving. (Photo by Sean Gardner/Getty Images)

The New Orleans Saints are in control of their own playoff destiny right now. They  took care of business Thanksgiving night against divisional rival Atlanta Falcons, which certainly increased their chances of getting a first-round bye in the playoffs.

The Saints took a 16-9 lead into halftime against the Falcons, and they managed to put the Falcons away in the second half as they leaned heavily on their excellent kicker, Wil Lutz, and a smothering, dominating pass rush that accumulated nine sacks of Matt RYAN. A win against the Falcons was huge for New Orleans, however: it guaranteed the Saints their third NFC South championship in a row.

New Orleans also got first-round home field advantage in the playoffs with a win over the Falcons, so there was a good deal at stake for Drew Brees and company on Turkey Day. Here’s a look at the Saints updated playoff outlook and Super Bowl odds after their big win against the Falcons:

*Note: all playoff percentages and data are courtesy of Playoff Status.

As it stands, the San Francisco 49ers (10-1) currently hold the top spot in the NFC, and the Saints hold the #2 slot. The NFC North-leading Green Bay Packers (8-3) are the division’s third seed, and the Dallas Cowboys (6-6), who also played (and lost) on Thanksgiving, are the current fourth seed, although that will change if the Philadelphia Eagles win this Sunday.

The NFC’s two Wild Card spots are currently held by the Minnesota Vikings (8-3) and the Seattle Seahawks, who, at 9-2, may be the best team in the NFC, but they sit a full game behind the dominant 49ers in the NFC West.

The Saints will host the 49ers in a huge NFC showdown Week 14, and the winner of that game will be the number one seed in the conference. New Orleans will also play the Indianapolis Colts, the Tennessee Titans and the Carolina Panthers after the big matchup against San Francisco, so their remaining schedule will certainly test them. 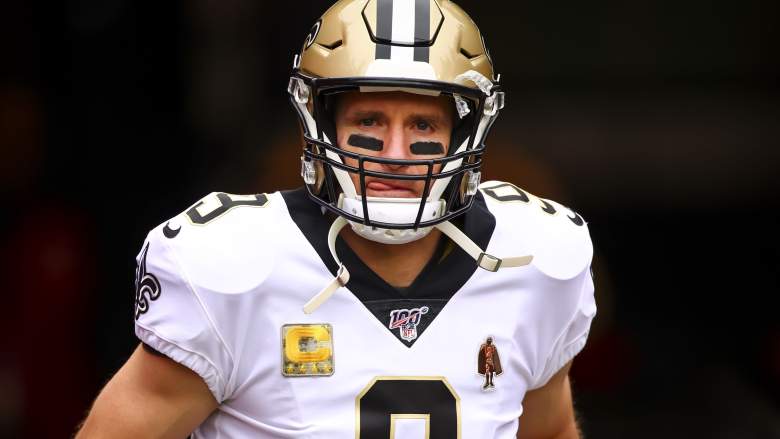 GettyWhat are the Saints’ Super Bowl odds? Here’s an updated postseason look at what’s happening with Drew Brees and the Saints.

Per Playoff Status, the Saints have a 13% chance of winning the Super Bowl and a 26% chance of making it to the big game. They also have a 52% chance of going to the NFC Championship, which makes next week’s matchup against San Francisco all the more intriguing.

Right now, the odds favor New Orleans hosting the Minnesota Vikings in the first round of the playoffs, but that could change in the coming weeks, of course.