Getty Taulia Tagovailoa has a bright future at Alabama.

Tua Tagovailoa’s brother, Taulia Tagovailoa, is a freshman quarterback at Alabama who the program initially planned to redshirt this season. The injury to his brother means Tagovailoa is now the backup quarterback to Mac Jones and the school will no longer redshirt him for 2019. Alabama head coach Nick Saban discussed Tagovailoa’s status heading into their matchup with Western Carolina in Week 13.

“We’re gonna play him this week in this game some kind of way regardless of how the game goes to try to get him some experience, some playing time and hopefully some confidence,” Saban told AL.com. “When we had the unfortunate injury last week to Tua, that kind of negated the opportunity to be able tor redshirt to Taulia.”

As Saban predicted, Tagovailoa saw the field and went two-for-three on his pass attempts for 35 yards and a touchdown. Alabama fought hard to keep Tagovailoa with a number of schools showing heavy interest including LSU.

Tagovailoa was a highly-touted high school recruit who played at Thompson High School after his family decided to move from Hawaii to Alabama to be closer to his older brother. Tagovailoa was ranked as a four-star recruit and the No. 5 pro-style quarterback in the country by 247 Sports.

The injury to his brother means the future could be now as he is only one unfortunate play away from seeing the field. This is a big reason why Alabama decided not to redshirt him this season.

“With him being now the backup quarterback, we thought we needed to play him, because if something happens to this quarterback, Mac Jones, he’s going to be the guy that’s got to go in the game and try to win the game for us,” Saban noted to AL.com.

Taulia Believes He Can Be Better Than Tua

Tagovailoa dismissed the idea that there is additional pressure on him to succeed because of what his brother has accomplished. He is embracing the high expectations and does not seem to lack for confidence. Tagovailoa admitted to Bleacher Report in 2018 that he thinks he has a chance to be even better than his brother.

“This is forcing me to be good,” Taulia explained to Bleacher Report. “It’s pretty much mandatory now. To me, it wouldn’t make sense for Tua to be this good and his brother to be so-so. Now that I’m in it, I love it. I feel like I could be as good as him or maybe even better.”

The expectations are already high as some believe Tagovailoa has pro potential just like his brother. Longtime football coach June Jones coached Tagovailoa for one high school season and believes the quarterback has the potential to one day be “a No. 1 draft pick.”

“I’m putting some pressure on him, but I really believe he can be a No. 1 draft pick by the time he gets done,” Jones admitted to Bleacher Report. “Even though he’s probably only going to be 6’1″ or 6’2″, he’s going to be a special player. …And he’s going to keep getting better.” 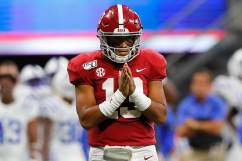