Getty Tua Tagovailoa sustained a dislocated hip during the 2019 season.

Tua Tagovailoa’s injury has been ruled a dislocated right hip and the Alabama quarterback will miss the rest of the season. Alabama released a statement providing an update on Tagovailoa’s status, per The Athletic’s Bruce Feldman.

Tua Tagovailoa sustained a right hip dislocation that was immediately reduced at the stadium. He is undergoing further testing to determine the best course of treatment. He is expected to make a full recovery but will miss the remainder of the season.

Senior Bowl executive director Jim Nagy noted that Tagovailoa’s injury has a similar feel to what happened to Bo Jackson’s hip and had major implications on his career. The good news is that medical care and technology have advanced since Jackson sustained the injury.

"He was screaming in pain as medical training staff had to pick him up and carry him off the cart." @MollyAMcGrath said the first report is that Tua Tagovailoa suffered an injury to his right hip vs. Mississippi State. pic.twitter.com/ppMJykMq9N

Tagovailoa was the favorite to be the No. 1 quarterback selected in the 2020 NFL draft, a distinction that now likely goes to LSU’s Joe Burrow. Bleacher Report’s Matt Miller noted he would be surprised if the recent injury did not cause Tagovailoa to return to school for the 2020 season.

“The opposite. It would be a complete shock if he decided to enter the 2020 draft. I’d even call it a mistake at this point. So we’ll table it and talk about it once he’s healthy…Let’s worry about Tua getting healthy first. That’s my point. Draft stock is a concern far down the line,” Miller noted on Twitter.

Tua started the game 9 for 9 passing for 193 yards and 2 touchdowns.

Then, up 35-7, Alabama kept passing and he suffered what appears to be another serious injury.pic.twitter.com/kUwukyIw7x

Tagovailoa’s main concern is making a full recovery that will allow him to get back on the field. While the Alabama quarterback clearly has pro talent, there will be concerns about Tagovailoa’s health moving forward. Tagovailoa has now had two ankle surgeries and a serious hip injury within the last year. Fox Sports’ Colin Cowherd explained that he does not believe Tagovailoa’s recent injury would have a major impact on his draft stock.

“My only real knock on Tua is health. But does anyone really think he will drop in the Draft? Maybe a spot. But Russel Wilson will be MVP. Kyler Murray has been very good. Those are the Tua comps. And the NFL is a copycat league,” Cowherd tweeted.

Report from @JimNagy_SB of fracture and surgery. Likely fracture dislocation of hip with acetabular fracture. Not saying career over but career threatening and certainly his draft [stock] is damaged. Too bad. Hope for the best…And I wasn’t spreading doom & gloom which is why didn’t directly compare Tua to Bo Jackson. The hip fracture dislocation didn’t end Bo career, the AVN (lack of blood flow) did. Tua doesn’t have that yet. Thus career threatening but not career ending yet. But draft stock affected. 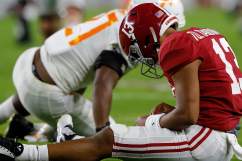