Getty Chase Young is one of the top NFL draft prospects.

Ohio State defensive end Chase Young is one of the top 2020 NFL draft prospects. Young’s floor appears to be the No. 2 pick and the star pass rusher has a good chance to the No. 1 overall selection in April’s draft.

Where Young is selected likely depends on if a quarterback-needy team lands the top selection. The current standings have the Bengals as the favorite to be the No. 1 pick which would leave them with an interesting dilemma.

Cincinnati needs to solidify their quarterback of the future, but it will be hard to pass up the star Buckeye. Both The Athletic’s Dane Brugler and Bleacher Report’s Matt Miller have Young being selected by the Giants with the No. 2 pick.

“Young has a special combination of size, power and athleticism, as well as the technical understanding and instincts to be an All-Pro NFL pass-rusher,” Brugler noted on Young’s NFL outlook.

Here is a look at Young’s NFL draft profile.

STRENGTHS: Young is elite at getting to the quarterback which is one of the most valuable skills you can find in the NFL. Young has had two straight seasons with double-digit sacks including 16.5 sacks heading into the Big Ten Championship.

Young is freakishly athletic and has rare size at 6’5″ and 265 pounds. Young is the consensus top defensive player in the draft. Miller evaluates Young as a better prospect than Joey Bosa, Nick Bosa and Jadeveon Clowney were heading into the NFL.

The easiest pick ever for general manager Dave Gettleman, if he’s still running the New York Giants in late April, will be this one. Ohio State’s Chase Young is a rare prospect at defensive end: better than either Bosa brother, who were both injury question marks, and better than Jadeveon Clowney (injuries) coming out of college too.

ESPN’s Todd McShay has Young as his top-ranked prospect and noted that the pass rusher has the potential to play a hybrid role at defensive end and linebacker. McShay noted that Young can play in either a 4-3 or 3-4 scheme for whatever NFL team he lands.

He best fits as a 4-3 defensive end, but he has experience dropping into coverage and could end up converting to a 3-4 outside linebacker role. He has been nothing short of dominant this season, head and shoulders above the rest of the edge rushers in the class.

WEAKNESSES: There are sure to be questions about Young’s suspension for taking money from a family friend for travel expenses. While Young will have to talk with teams about the incident, the NFL is unlikely to put a lot of stock in the defensive end breaking an NCAA rule, especially for something that is far from being illegal.

It is hard to find many weaknesses in Young’s game. Young is known as an elite pass rusher and teams will want to continue to see that he can also defend the run and pass.

SUMMARY: If a team who already has a quarterback lands the No. 1 pick, Young will be a near-lock to be the selection. The lowest Young is projected to go is No. 2 as one bad NFL franchise will be thrilled to land a generational pass rusher. 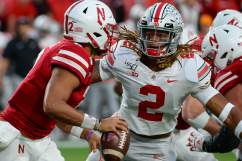 Chase Young’s Suspension: What Did Ohio State Star Do?