The Philadelphia Eagles (5-7) were supposed to win this one. And yet, despite having a 28-14 lead in the third quarter, the Eagles fell to the now 3-9 Miami Dolphins Sunday, in what turned out to be a huge blow to their playoff hopes this season.

The Eagles were 10.5 point favorites going into their matchup against the Dolphins, and they let this one get away. They are still alive in the playoff picture, however–but their chances took a major hit today.

Here’s a look at the playoff picture in the NFC, along with a look at what the Eagles’ playoff chances are after their surprising loss to the Dolphins Sunday afternoon.

*Note: all playoff percentages and data are courtesy of Playoff Status

The San Francisco 49ers (10-2) currently hold the top spot in the NFC, with Drew Brees and the New Orleans Saints holding the #2 slot. The Green Bay Packers, who lead the NFC North, are the division’s third seed, and the Dallas Cowboys (6-6), who lost on Thanksgiving, are the current fourth seed after Philly’s loss Sunday.

The NFC’s two Wild Card spots are currently held by the Minnesota Vikings and the Seattle Seahawks, the latter of who, with a win Monday night against the Vikings, could move into a first-place tie with the Niners in the West. So where do the Eagles fit into the playoff picture currently? 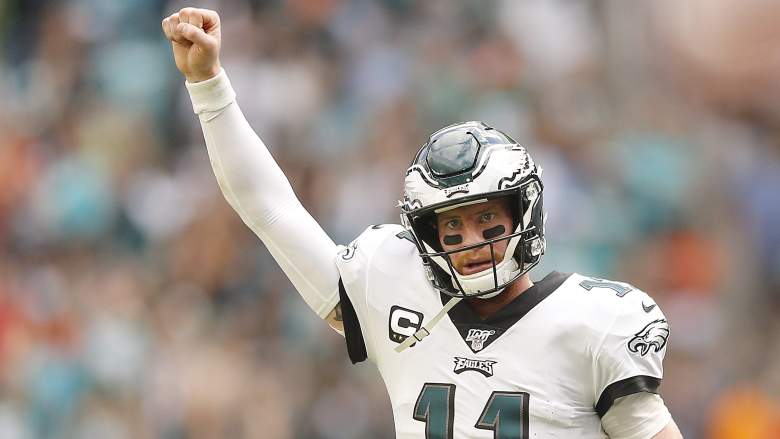 GettyMIAMI, FLORIDA – DECEMBER 01: Carson Wentz #11 of the Philadelphia Eagles celebrates after throwing a touchdown to J.J. Arcega-Whiteside #19 (not pictured) against the Miami Dolphins during the second quarter at Hard Rock Stadium on December 01, 2019 in Miami, Florida. (Photo by Michael Reaves/Getty Images)

They now have a less than 1% chance of nabbing the Wild Card, so they are a team in control of its own destiny when it comes to making the playoffs. Philadelphia now has a 63% chance of missing the playoffs this season. While much still depends on the Dallas Cowboys and how well they perform in the final weeks, the Eagles could only help themselves by winning out.

They held a potential tie-breaker over the Chicago Bears, who are also technically alive in the playoff hunt, but that no longer matters. For the Eagles, what matters most right now is that they still have a 37% chance to win their division, and their closest competitor, the Cowboys, are a team that has been imploding as of late.

Philadelphia has made the playoffs both of the past two years, winning the Super Bowl after their storybook 2017 season.