Jalen Hurts has had no shortage of success during his college football career, but the big question is how the Oklahoma quarterback’s game will translate to the NFL. Hurts has a wide-range of projections from as early as the second round to being a Day 3 pick. Hurts has had success at both Alabama and Oklahoma with four College Football Playoff appearances.

Pro Football Focus’ Mike Renner has Hurts as the No. 21 ranked prospect that is playing in the College Football Playoff calling the Sooners quarterback a “midround pick.”

The stats are eye-popping, but he has not been as good as past Oklahoma greats Baker Mayfield or Kyler Murray in our grades. Hurts has been limited throwing down the field, with only 15 big-time throws on the season (51st in college football). Still, his legs and ability to protect the football are traits you can win with in the NFL, though he’s likely to be a midround pick.

ESPN’s Mel Kiper Jr. has Hurts ranked as his No. 8 quarterback for the draft. The key for Hurts to prove in his remaining time as a college player and during the pre-draft process is how effective he looks throwing in the pocket as Kiper detailed.

Hurts was a much better runner than passer at Alabama and, as impressive as his passing stats are this season, there are concerns about Oklahoma coach Lincoln Riley’s pass-friendly scheme having inflated those numbers. He presses at times and, while his completion percentage is impressive, he still occasionally misses. Overall, Hurts is still a better runner than passer but has made strides this season. He’s also a proven winner and outstanding leader with experience in multiple offenses. He comes in at No. 99 in our early rankings, but he has a chance to rise throughout the pre-draft process.

Hurts is a dynamic athlete who has evolved as a passer since transferring to Oklahoma. At times, Hurts can be prone to making costly turnovers and taking unnecessary risks.

Hurts is ranked as the No. 99 overall prospect by ESPN’s Todd McShay which would make the Sooners quarterback a third-round pick. While Hurts still has flaws as a prospect, McShay noted he has seen some improvement since he arrived in Norman.

But his numbers have popped to a new level this season as he learns under Lincoln Riley, who of course produced the past two Heisman Trophy winners and No. 1 picks in Mayfield and Murray. Hurts seems to be worrying less about making mistakes or turning the ball over and instead is playing more “grip-it-and-rip-it” football.

Former Jets general manager Mike Tannebaum suggested on ESPN that the Ravens take a look at Hurts. The Ravens already have their franchise quarterback, but Tannebaum believes the two could share the field, at times, with special offensive packages.

“Let’s say the Baltimore Ravens draft him and put him in the backfield with Lamar Jackson,” Tannenbaum said, via 247 Sports. “Is that what football looks like in five years when you have two people that can run it and throw it? They would be impossible to defend…At the end of the day in pro football, we play with what college football puts out. This sport is evolving. Hats off to John Harbaugh and the Baltimore Ravens. They’re going to be so hard to defend, not only with what they’re doing now with Jackson and their tight ends. But could you imagine if they add a second element that could run it and throw it?”

As of now, Hurts could go as high as the second round or fall to the fourth round. Based on most projections, Hurts is estimated to be a third-round selection, but it would not be surprising if someone snags him with a late second-round pick.

While Tannebaum’s idea is intriguing, it would be surprising if the Ravens used such a high draft pick on a quarterback given the team already has Jackson. Baltimore will likely be using these picks to build around their franchise quarterback. 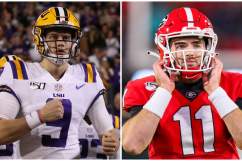