Getty LSU takes on Clemson in the national championship.

LSU is headed to New Orleans to take on Clemson for the national championship. LSU opens as a four-point favorite over Clemson in the title game spread, per OddsShark. The over-under is set at 68 points which is significantly lower than the Peach Bowl’s number.

LSU was listed as a three-point favorite over either the Tigers or Buckeyes prior to the Fiesta Bowl, per FanDuel Sportsbook. The national championship will take place on Monday, January 13th at 8 p.m. Eastern.

Prior to the College Football Playoff semifinal games, LSU was a one-point favorite over Ohio State and a 1.5 point underdog against Clemson. The Tigers’ dominant performance against the Sooners makes it hard to see LSU as an underdog, especially in what will be an unofficial home game in New Orleans.

Joe Burrow continues to cement his status as the favorite to be the No. 1 pick in the 2020 NFL draft. Bengals fans may want to start buying jerseys featuring the LSU quarterback. Clemson has dominated in Vegas going 11-3 against the spread this season while LSU is 9-3-2 versus the number heading into the championship game.

LSU Is a Slight Favorite Over Clemson

LSU enters the national championship undefeated and will face another undefeated foe in the title game. Clemson offers an intriguing matchup given their championship pedigree.

Trevor Lawrence leads a core group of players that has already won a national title. Like LSU, Clemson does not lack big-play receivers as they are led by Tee Higgins and Justyn Ross among other playmakers. Travis Etienne is one of the top running backs in the country to give Clemson a balanced attack.

Prior to their matchup with Oklahoma, LSU head coach Ed Orgeron declared that the team had their eyes on more than just a Peach Bowl victory. LSU looks poised to end the season with a championship.

“This is my job,” Orgeron noted prior to the Peach Bowl. “It’s not about me. It’s about the team, it’s about the state of Louisiana. When you come to LSU, the expectations are high. Obviously, when you have the amount of talent we have on this football team, and the great coaches that we have, these are expectations that you have to meet at LSU. Obviously, proud of our football team. This is not our final destination. We came here for a playoff game.”

It is hard to imagine any team stopping LSU in the title game. Their weakness was said to be their defense, but the Tigers’ pass rush played a crucial role in LSU being able to jump out to an early lead against Oklahoma. I like LSU to win by double-digits which is sure to fit into Dabo Swinney’s underdog narrative despite Clemson being undefeated.

LSU coasted in the Peach Bowl, and it is hard to imagine the physicality of Clemson’s game with Ohio State not taking its toll. Clemson sustained multiple injuries during a very physical contest. Lawrence and Higgins were among those shaken up during the game. Both players re-entered the game, and it will be interesting to see if there are any lingering effects of the Fiesta Bowl heading into the title game.

Clemson brings its championship experience into New Orleans, but LSU has been the more complete team. With the exception of a couple quarters against Ole Miss, LSU has been one of the most consistent teams in college football. Clemson defensive coordinator Brent Venables will earn every penny of his salary in the two weeks leading up to the championship matchup, as he tries to come up with a plan to slow down LSU’s offense.

Burrow has the LSU offense looking like the best unit in the country, and it is not particularly close. We like Orgeron to bring a title back to Baton Rouge as the Tigers roll in the national championship and cover the spread. It would not be a surprise if we continue to see the line move even more towards LSU prior to kickoff. 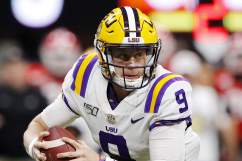