Getty Marshawn Lynch has remained in contact with the Seahawks about the 2020 season.

Marshawn Lynch is once again a member of the Seatle Seahawks but his contract is not the massive deal Beast Mode previously had with the team. Lynch signed a one-year, $1.03 million contract with the Seahawks and has a base salary of $60,588, per Spotrac. The deal is only for the one regular-season game plus the number of playoff games the Seahawks will play. NFL Network’s Ian Rapoport noted that $60,588 is the pro-rated amount Lynch receives for one game.

“For his return to Seattle, #Seahawks RB Marshawn Lynch will make $60,588 in Week 17, plus whatever the playoff share ends up being… plus his share of online sales of ‘Unfinished business’ and ‘Back in Action’ apparel on his website,” Rapoport reported on Twitter.

The Athletic’s Jayson Jenks reported that Seahawks GM John Schneider remained in contact with Lynch’s agent Doug Hendrickson just in case an opportunity arose for the running back to return to Seattle. When Chris Carson and C.J. Prosise both were lost for the season in Week 16, it was the perfect time for Lynch to come back.

Hendrickson admitted that he initially did not know how interested Lynch would be in playing again. The running back last suited up for the Raiders in 2018.

“It was a bug put in my ear that, hey, this could be a possibility,” Hendrickson told The Athletic. “Not knowing when … not knowing if this could ever happen. But, hey, wouldn’t this be great, wouldn’t it be cool? That type of thing.”

Prior to Lynch’s return, Seahawks head coach Pete Carroll noted that the running back was motivated to prove he can still play at a high level.

“He is highly motivated to do everything he can do in this game, he really is,” Carroll said, per Seahawks.com. “He wants to do everything he could possibly do, and he wasn’t done. He got in the situation where he was injured and had a rehab and all that, and it just didn’t fit together right away, but he’s not done playing, he wants to go, so this is his entree, and he’s going to go for it. He won’t hold back, he won’t hold back one bit. I’m looking forward to see what happens.”

Lynch Has Earned More Than $56 Million Over His NFL Career

Lynch previously signed a two-year, $9 million contract with the Raiders in 2017. According to Spotrac, Lynch has earned $56.77 million over his career. Lynch had a $4.5 million salary with the Seahawks when he was last with the team in 2015 and also had a $7.5 million signing bonus.

There had been rumors that Lynch had not spent any of his game checks, instead choosing to live on endorsement money. Lynch denied this in an interview with Sports Illustrated.

“That’s false,” Lynch noted, per Sports Illustrated. “I’m human. I’m very much human. If you pinch me, that hurts. I make mistakes, [but] I’ve also made some good decisions. But why would you wanna pocket-watch me?” 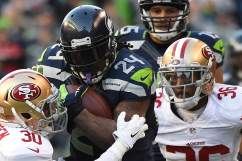