Marshawn Lynch has a good chance to sign with the Seattle Seahawks.

The Seattle Seahawks lost Chris Carson for the season causing many fans to wonder if we could see Marshawn Lynch back in blue and action green. To make matters worse, the Seahawks also lost backup C.J. Prosise with a broken arm, and Rashaad Penny was placed on injured reserve earlier this season. The Seahawks now only have one running back, Travis Homer, on the active roster.

NFL Network’s Ian Rapoport reported that Lynch plans to meet with the Seahawks on Monday.

“Marshawn Lynch and the #Seahawks are open to a reunion, and Lynch has told people he plans to travel to Seattle today to discuss it, sources tell me, @MikeGarafolo and @TomPelissero. #BeastMode could be back in Seattle,” Rapoport tweeted.

Pete Carroll told 710 Seattle that Lynch has a “really good chance” to play again for the Seahawks pending a physical. The News Tribune’s Greg Bell detailed Carroll’s comments on his weekly radio show.

“Pete Carroll on @710ESPNSeattle confirms Marshawn Lynch is flying in to meet with him #Seahawks, ‘there’s a really good chance’ he re-signs. ‘I think it’s freakin’ awesome.’ Thinks Lynch ‘May have 4 or 5 games left in him. It’s on,’” Bell tweeted.

Lynch has not played since 2018 when he suited up for the Raiders and has not taken a snap this season. The Seattle Times’ Bob Condotta noted that Lynch re-signing with the Seahawks cannot be “ruled out.”

“And as for Marshawn Lynch? I don’t think it can be ruled out,” Condotta tweeted.

The Athletic’s Michael-Shawn Dugar does not see Beast Mode in Seattle’s future.

“I told a player that Chris and CJ were out for the year and that they’d have to sign someone,” Dugar noted in a recent question and answer session. “His response was “We will. I know a guy.” he was joking but all that flashed in my head was Marshawn. (That’s not gonna happen, to be clear.)”

Rapoport noted that Lynch and the Seahawks have maintained a positive relationship since his retirement.

“The #Seahawks have a loooong history with Marshawn Lynch, but the organization and BeastMode have always maintained a great relationship. That helps in times like this,” Rapoport noted on Twitter.

The Lynch rumors initially started when the former running back stopped by a Seahawks’ practice. The visit was not to meet with the Seahawks front office but to see his old teammates as The Seattle Times’ Matt Calkins detailed.

Lynch did drop by the Seahawks’ practice facility earlier this month, as he has been known to do. It wasn’t to inquire about wearing the blue and green again; he just wanted to catch up with old friends. But it does serve as a reminder he has an affinity for this organization.

Earlier this season, Lynch told the Toronto Sun that he planned on staying retired.

“You know? This time, and I said this before, man,” Lynch told the Toronto Sun. “But you know…I’m just going to say s—. S— happens. But as of right now? Yeah, I’m done…I stay ready, but I’m done though.”

Lynch may be a long shot to sign with the Seahawks, but it will be interesting to see if the team could kick the tires on bringing back the fan-favorite for one more postseason run.

The Seahawks Have Been Linked to C.J. Anderson

“Hearing a player Seattle could have interest in is C.J. Anderson,” Condotta noted on Twitter.

After the Seahawks loss to the Cardinals, Carroll noted that the team will be signing a running back this week.

“We did get both our running backs banged up today,” Carroll noted, per Seahawks.com. “Chris and C.J. both got hurt. They’re out, so we’ve got to get to scrambling. Johnny’s got to get to work and figure out what we’re doing next. That was a lot of game for Homer to have to play by himself, so obviously we’ll make some moves here and figure some stuff out.”

Seamocks.com’s Jared Stranger provided a rundown of the available practice squad running backs that the Seahawks could make a run at prior to Week 17.

“Marshawn Lynch isn’t the only former #Seahawks RB who might return. Sources say Robert Turbin is expected to pay a visit to the team in the near future,” Garafolo tweeted. 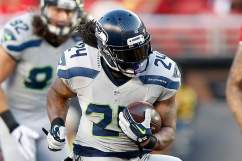 Seahawks Get Visit From Seattle Legend

Read More
Football, NFL, Seattle Seahawks
Will the Seahawks sign Marshawn Lynch? Find out the latest Seahawks rumors on what running backs the team has an interest in signing after Chris Carson's injury.