Getty Chris Carson is expected to generate plenty of interest around the NFL.

The Seahawks losing to the Cardinals is the least of the team’s concerns as Seattle lost several more players for the season due to injuries. Running back Chris Carson has been ruled out for the season with a cracked hip, per The Seattle Times’ Bob Condotta.

“Carroll says Chris Carson is out for the season. Duane Brown also done. Will have surgery tomorrow. Wow…Carroll says Carson has injury similar to one Lano Hill suffered last year based on preliminary reports,” Condotta tweeted.

There is additional bad news for the Seahawks as the team also lost C.J. Prosise for the season with a broken arm. This means the Seahawks have now lost their top three running backs during the second half of the season. Prosise was filling in for Rashaad Penny as the team’s No. 2 back.

Seattle tackle Duane Brown will also need surgery which will sideline him for the 49ers matchup and at least the early rounds of the NFL playoffs. Seahawks pass rushers Jadeveon Clowney and Ziggy Ansah have also been sidelined with injuries.

The Seahawks are hurting in the secondary as top corner Shaquill Griffin and safety Quandre Diggs have also been sidelined. All this adds to a mounting list of injuries heading into their season finale against San Francisco.

The Seahawks Plan on Signing a Running Back

Travis Homer spent the end of the Cardinals game as the team’s lone running back. Seahawks head coach Pete Carroll confirmed after the game that the team will have to sign at least one running back this week. Even before the latest injuries, the Seahawks worked out running backs the last two weeks including Alfred Blue and Robert Turbin. Seattle opted not to sign any of the backs prior to either Week 15 or Week 16.

“We are going to figure a way out,” Carroll noted after the game, per The News Tribune.

“A rough loss grows much, much worse for the #Seahawks: Coach Pete Carroll told reporters that RB Chris Carson (hip) is out next week and docs believe he may be out for the playoffs. RB CJ Prosise broke his arm. And LT Duane Brown will have knee surgery tomorrow, but could return,” Rapoport tweeted.

Carroll emphasized that the team is going to make roster moves ahead of the upcoming 49ers game.

Despite all the bad news, the Seahawks will play the Niners in Week 17 with the NFC West title on the line. Seattle will still need some help if they hope to land one of the top two seeds as even a win over the 49ers would not guarantee the team can climb back up to secure a first-round bye. The question is whether the Seahawks can overcome all the injuries to compete with one of the top teams in the NFL. 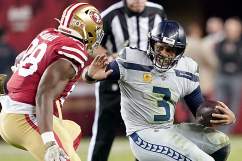