The NFL MVP race appears to be down to the Seahawks’ Russell Wilson and Ravens’ Lamar Jackson with a month to go in the season. Heading into Week 13, Jackson had a sizable lead on Wilson in the latest MVP odds as the Ravens quarterback is the favorite at -300, per OddsShark. Wilson is next in line at +300, while Patrick Mahomes is a distant third with +1200 odds.

The question is whether Jackson may have opened the door a bit more for Wilson after notching just 105 passing yards against the 49ers. Jackson still managed to rush for more than 100 yards in a game with pouring rain on his way to making a bit of NFL history.

It marked Jackson’s fourth game this season with more than 100 rushing yards which is the most of any quarterback in NFL history, per the NFL. Jackson surpassed Michael Vick and, yes, Wilson to take possession of the achievement.

Wilson Has Better Passing Stats, While Jackson Is Closing in on 1,000 Rushing Yards

Jackson has thrown for 2,532 yards, 25 touchdowns and five interceptions while completing 66 percent of his passes. The Ravens quarterback is closing in on 1,000 yards rushing (currently at 977) and has seven touchdowns.

Wilson has the edge in passing statistics, while Jackson has a large lead in the rushing categories. Jackson and the Ravens also defeated the Seahawks earlier this season. We might need all 17 weeks to figure out who should win MVP between the two quarterbacks.

Strong performances by Wilson when they are the only game in town could help his MVP campaign. Yahoo Sports’ Frank Schwab pointed out that Wilson has an opportunity to match Jackson’s recent showcase game.

If you put on a show with the NFL world watching on Monday night, we’ll remember it. Ask Lamar Jackson.

Jackson threw five touchdowns against the Los Angeles Rams on “Monday Night Football” in Week 12, and everyone rightfully made him the favorite in the NFL MVP race. The good thing for Russell Wilson is he has a chance to match that when his Seattle Seahawks face the Minnesota Vikings on Monday night.

The Seahawks have a difficult schedule to close out the season, and if Wilson continues to put up great numbers it will be against some of the best teams in the NFL. Jackson may be the favorite, but Seahawks fans are hoping Wilson can make it a December to remember. 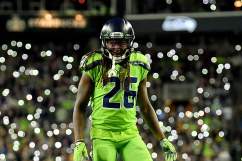