Getty The Seahawks will be either the No. 3 or No. 5 seed in the NFC.

The Seattle Seahawks are headed to the NFL playoffs but their seed will be determined by the outcome of their season finale with the 49ers. The best-case scenario for the Seahawks is now the No. 3 seed as the Saints and Packers victories mean Seattle does not have a chance at a first-round bye. The Seahawks will play either the Eagles or Vikings in the postseason.

Seattle will now either be the No. 3 or No. 5 seed in the NFC. With a win over the 49ers, the Seahawks would host the No. 6 Vikings on Wild Card Weekend. A loss to the Niners means the Seahawks would go on the road to play the Eagles.

It looked like the Seahawks were going to get some help from the Lions, but the Packers were able to hit a game-winning field goal after trailing by double digits. The Seahawks would have had a chance at the No. 2 seed if the Lions were able to pull off the upset.

The Seahawks made news ahead of the playoffs by bringing back former Seattle running backs Marshawn Lynch and Robert Turbin. It will be interesting to see if the rushers can give the team a boost in the postseason after Chris Carson was ruled out for the rest of the season. Seahawks head coach Pete Carroll noted that Lynch is motivated to prove he can still play at a high level.

“He wants to do everything he could possibly do, and he wasn’t done,” Carroll explained, per Seahawks.com. “He got in the situation where he was injured and had a rehab and all that, and it just didn’t fit together right away, but he’s not done playing, he wants to go, so this is his entree, and he’s going to go for it. He won’t hold back, he won’t hold back one bit. I’m looking forward to see what happens.”

Here is a look at the current Seahawks playoff standings. We will be updating the data below after the 49ers-Seahawks game.

No. 6 Minnesota Vikings vs. No. 3 San Francisco 49ers
No. 5 Seattle Seahawks vs. No. 4 Philadelphia Eagles
Bye: No. 1 Green Bay Packers, No. 2 New Orleans Saints 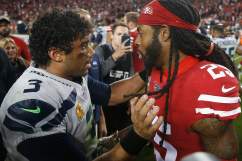