Getty The San Francisco 49ers are the No. 1 seed in the NFC. (Photo by Abbie Parr/Getty Images)

The San Francisco 49ers secured their spot as the No. 1 seed in the NFC playoffs by taking down their primary divisional rival, the Seattle Seahawks in a wild Sunday night game to close out the season Week 17.

The 49ers will sit home and watch the action this week, as they have a first round bye. The Green Bay Packers, as the No. 2 seed in the conference, will do the same. Both NFC matchups happening Sunday could impact the 49ers and who they play next week.

As noted, the 49ers are the top seed in the NFC, and they will have home field advantage throughout the playoffs. The Packers are #2, and will also host a playoff game at Lambeau next weekend.

The New Orleans Saints were in the #3 spot, and they played the #6 seed Minnesota Vikings in the first of two NFC Wild Card matchups Sunday. The Vikings won in a thrilling overtime contest, 26-20. The Vikings will now advance, while the Saints will be left to ponder their disappointing early exit.

The #4 seed Philadelphia Eagles will host the #5 seed Seattle Seahawks in the second game later Sunday. The 49ers will play either the Vikings, Seahawks, or Eagles next week. But which one will it be? 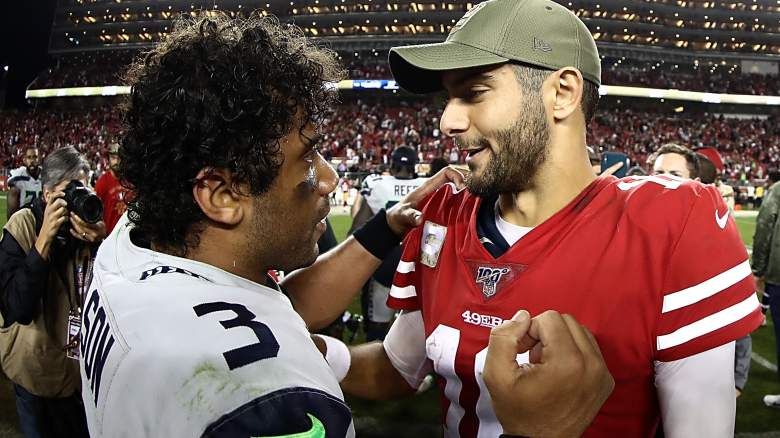 GettyThe Seattle Seahawks and the San Francisco 49ers are both representing the NFC West in the playoffs. (Photo by Ezra Shaw/Getty Images)

After the Vikings pulled off the upset and beat the Saints in New Orleans Sunday, Minnesota will now head to San Francisco to face the 49ers in the NFC Divisional Round next Saturday. The game will be played at Levi’s Stadium at 4:35 p.m. ET on Saturday, January 11. It will be the first playoff game of the weekend.

The 49ers last played the Vikings in September of 2018, in a game that saw quarterback Jimmy Garoppolo throw three interceptions. The Vikings won, 24-16, but this is a very different 49ers team, and they have played tough in every game this season.