Getty Jeff Teague is headed back to the Atlanta Hawks.

The Atlanta Hawks acquired Jeff Teague in a trade with the Minnesota Timberwolves in a move designed to give Trae Young a bit more help. The Hawks moved Allen Crabbe as part of the deal and also received Treveon Graham, per ESPN’s Adrian Wojnarowski.

Neither Teague or Graham are expected to start but give the Hawks depth off the bench. The trade also brings Teague back to Atlanta, a place where he thrived early in his career.

The Hawks recently rolled out a young lineup with arguably their five best players and had success against the Suns. We are likely to continue seeing Young play with John Collins, De’Andre Hunter, Cam Reddish and Kevin Huerter during the second half of the season.

Here is a look at the Hawks updated roster after the trade.

Heading into the season, the Hawks had aspirations to make a playoff run but little has gone as expected. Collins was suspended for 25 games and just recently returned to the Hawks lineup. The Hawks have also battled numerous injuries with Huerter, Reddish, Hunter and Young all being sidelined at various points this season.

The new Hawks starting lineup has a lot of potential, and the addition of Teague and Graham gives Atlanta a bit more firepower when Young heads to the bench.

Atlanta Has Been Linked to Center Andre Drummond

It will be interesting to see if more moves are on the way for the Hawks. The team has also been linked to Andre Drummond but so far have been unwilling to include a first-round pick, per The Athletic’s Sam Amick.

Yet while Detroit’s talks with Atlanta regarding Drummond were revealed by ESPN last week, a source with knowledge of the talks downplayed the prospect of that deal happening. While Atlanta’s brutal season (8-30) has added significant pressure to bolster the roster and give young star Trae Young more help, the Hawks, per a second source, could have landed Drummond already if they were willing to include a first-round pick in the deal.

Amick also reported that the Hawks have interest in Dewayne Dedmon, but have also not been willing to meet the Kings’ trade demands.

Elsewhere in Sacramento, big man Dewayne Dedmon’s hopes of getting moved have yet to come to fruition. Sources say the Hawks are among the teams with interest, but Kings general manager Vlade Divac has thus far been setting the asking price too high for Atlanta’s liking.

The Athletic’s Shams Charania reported in early December that the Hawks told Young that “the team would be getting him some help on the roster soon.” It remains to be seen whether this is the only deal the Hawks have in mind, or if Atlanta will continue to bolster their young roster. The Hawks are last in the Eastern Conference and face a tall task if the team hopes to get back in the playoff race. 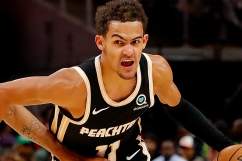 Read More
Atlanta Hawks, Basketball, NBA
The Atlanta Hawks have traded for Jeff Teague. Check out the updated Hawks roster and starting lineup with Teague back in Atlanta.