Dwyane Wade’s son Zaire Wade has had a bit of a slow start in his recruitment but his recent move to Sierra Canyon to play with Bronny James is expected to help bolster more offers. Zaire’s offers currently include DePaul, Rhode Island and Toledo, per 247Sports. Nebraska has also offered Zaire and his mother, Gabrielle Union, noted on Twitter that the family visited the school.

But when it comes to his recruitment, Wade certainly hasn’t gotten enough attention. A senior at Chatsworth (Calif.) Sierra Canyon, he has just four scholarship offers: DePaul, UC-Riverside, Rhode Island and Toledo. But Wade’s beginning to pick up steam.

During a scrimmage against Hillcrest Prep over the weekend, with D-Wade and LeBron James looking on, Zaire proved he’s worthy of more. He was aggressive, impacted the game with his creativity and passing, competed on defense and showed an improvement in his decision making.

Zaire noted that he tries to use opportunities against higher-ranked opponents to prove he belongs.

“The rankings are what they are,” Zaire explained to 247Sports. “I don’t pay attention to them. I talked to my coach and he told me that if I want to make an impact on the game, I shouldn’t have to worry about that…When I get on the court and there’s a guy in front of me … a few five-star guys, I just try to go at them extra hard and prove to everyone that thinks I’m undervalued, that I can play. I just love it.”

When you are a high school basketball player whose dad is a former NBA All-Star and repeat world champion it can lead to a challenging life. Zaire admitted that it was difficult at first, but he does not like to think of it as pressure anymore.

“When I was growing up, I felt like there was a lot of pressure, people telling me I had to be as good as he was,” Zaire explained to AZ Central. “As I got older, I just started to play my game. I knew they were there. It really made me perform better. Everybody was expecting me to do something, so I guess I’ve got to do it. I don’t call it pressure. I call it life. I was born into the life.”

Zaire Transferred to Sierra Canyon to Play With Bronny James

Zaire is now playing with Bronny, the son of LeBron James, at Sierra Canyon. The school’s games have become a regular occurrence on ESPN, and we are likely to see additional offers for Zaire continue to roll in.

Some have compared the team to the high school version of an NBA superteam. Zaire admitted his dad has given him a bit of advice on how to handle the challenges ahead. 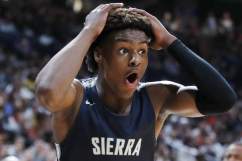