Getty Quarterback Josh McCown of the Philadelphia Eagles suffered a gruesome hamstring injury in the team's loss to the Seahawks.

Quarterback Josh McCown has had quite an NFL career. He has been in the league since 2002 and played in his first-ever playoff game on Wild Card weekend when the Philadelphia Eagles took on the Seattle Seahawks in the opening round. McCown went in for an injured Carson Wentz, and while the Eagles lost the game, the 40-year-old signal-caller still gave a valiant effort. And, as it turns out, that effort may have been more unbelievable than initially thought.

It was reported by NFL Network’s Mike Garafolo that McCown was injured in the second quarter against Seattle, and played the entire remainder of the game while dealing with a torn hamstring. McCown’s injury was severe also, as he tore the hamstring off the bone, which will require surgery.

Injury happened in the second quarter for McCown. Played through it. Remarkable toughness. There were also no more QBs left because Nate Sudfeld was inactive.

McCown is expected to fully recover, and his rehabilitation period will be six months. The veteran quarterback played in three games for the Eagles this season, and whether he returns next year for his 17th season remains to be seen, but he did retire previously, opting to return and sign with the Eagles. 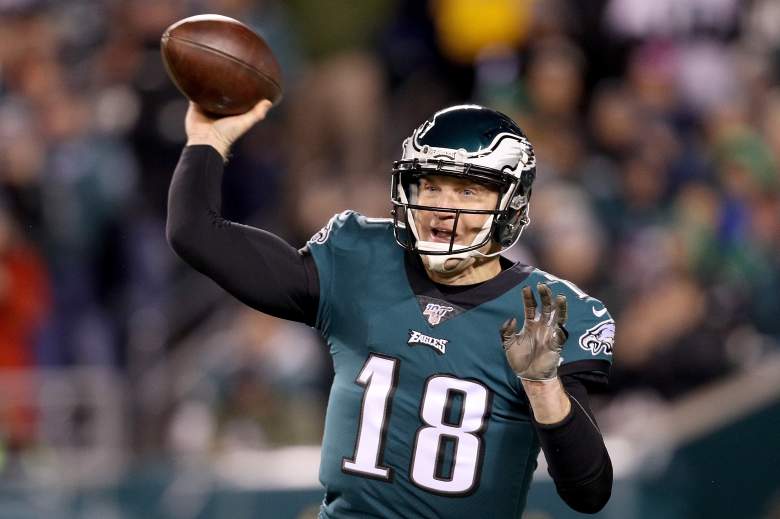 GettyEagles QB Josh McCown tore his hamstring off the bone against the Seahawks. Whether he returns for his 17th NFL season next year is still a question mark.

McCown broke down last week after the Eagles’ loss to the Seahawks, taking his first playoff defeat especially hard, as The Checkdown revealed.

McCown gave it everything he had. What a fighter ? pic.twitter.com/697byJMQUW

“It just hurts. It sucks,” McCown said, per NBC Sports. “From my standpoint as a quarterback you want to do more and you feel like you can do more and you start replaying plays in your mind where you can be better, and I always have that perspective that you let a group down. You let those people down that come to that building and that’s a sick feeling. It’s a hurt feeling.”

McCown finished the game against Seattle going 18-24 for 174 yards. He had no touchdowns and no turnovers, and he took the Eagles offense inside the Seahawks’ 30-yard line five times — which led to a total of three three field goals. McCown became only the sixth quarterback in his 40s in NFL history to play in a postseason game, and he did quite well, considering a major muscle in one of his legs was torn from the bone it’s normally attached to. For good measure, McCown also had 23 rushing yards on five attempts.

McCown is scheduled to have surgery next Tuesday, according to Tim McManus of ESPN.

Josh McCown played the second half vs. Seattle on a torn hamstring and is scheduled to undergo surgery Tuesday, sources tell ESPN.

While he took the loss of his first playoff game hard, McCown also noted how special the experience was, calling it an “honor” to play for the Eagles, via NBC Sports.

“Man, what an honor it was to be in that group and watch Doug lead that team, watch the veterans lead this team, watch Carson play the way he did down the stretch,” McCown told reporters after the playoff loss. “That’s special.”