Getty Nick Bosa of the San Francisco 49ers will be heading to Miami for Super Bowl LIV. (Photo by Thearon W. Henderson/Getty Images)

Rookie of the Year Nick Bosa of the San Francisco 49ers has had a spectacular debut season that will be capped off by an appearance in Super Bowl LIV. Bosa had nine sacks, a forced fumble, two fumble recoveries and an interception his rookie year, but his biggest game of the year will be February 2 when he faces Patrick Mahomes and the Kansas City Chiefs.

The Chiefs are the reigning AFC West champions, and they play their divisional rival, the Los Angeles Chargers, twice a year. Thursday, Bosa was asked if he planned on seeking any advice from his brother, Chargers Pro Bowl defensive end Joey Bosa, and it looks like he will.

Nick Bosa on Brother Joey: ‘We’re Going to Be Talking’ 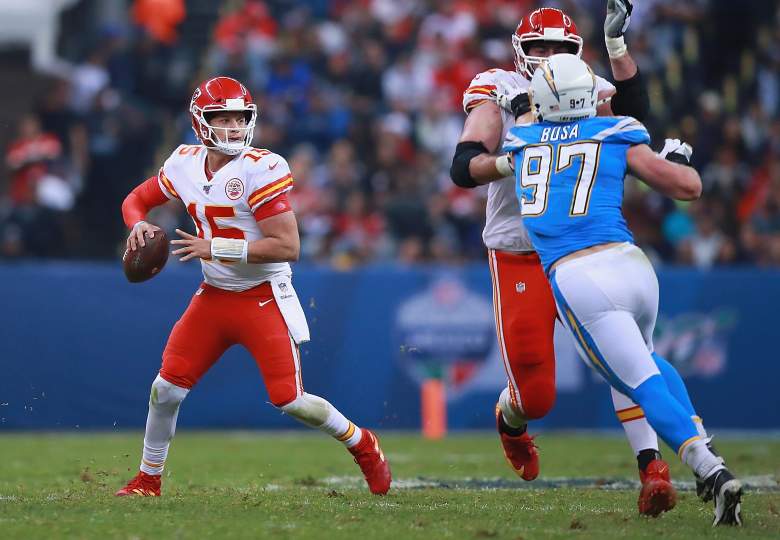 GettyQuarterback Patrick Mahomes of the Kansas City Chiefs drops back to pass over defensive end Joey Bosa #97 of the Los Angeles Chargers during the game at Estadio Azteca on November 18, 2019 in Mexico City, Mexico. (Photo by Manuel Velasquez/Getty Images)

Bosa didn’t hesitate when asked if he would seek advice from the ender Bosa. “Yeah, definitely. We’re going to be talking,” Bosa said of his big brother. “He has pretty good input on these guys. He’s going to give me everything that he could give me and it’s up to me to go use it.”

Whether the Chargers’ superstar will be able to lend his little bro any nuggets of wisdom that translate on the field remains to be seen, but it’s certainly an advantage for Nick Bosa and his team, as he will surely pass what he learns from his brother on to the rest of the 49ers defense. The elder Bosa hasn’t beaten the Chiefs much, however, and neither has his team.

The Chargers have beaten Kansas City just once since 2013, which was in December of 2018. Los Angeles has gone just 1-11 in their last 12 games against the Chiefs, and Bosa was relatively quiet against them this year, not logging any sacks — although he did have four quarterback hits this season.

Bosa knows how dangerous Mahomes and this Kansas City offense is , and he noted Thursday that getting after Mahomes will be important for this 49ers defense. “Yeah, we’re back playing a mobile quarterback and one who could throw better than any we’ve faced. One of the biggest things is trying to keep him in the pocket and not let him escape when he wants to escape and make him uncomfortable.”

Bosa also said that facing a mobile superstar twice a year in Seahawks quarterback Russell Wilson has helped the team prepare — at least somewhat — for a mobile quarterback like Mahomes. “Yeah, I think we’ve gotten better this year as we’ve played,” Bosa said. “We’ve faced just about everything you can face. Obviously, this will be a little bit different challenge, but I trust everybody around me.”

READ NEXT: Nick Bosa Contract: How Much Money Does 49ers DE Make?