Getty Thaddeus Moss is the son of Randy Moss.

LSU tight end Thaddeus Moss is the son of legendary wide receiver Randy Moss. Randy was just named as one of the NFL’s top 100 players during the league’s anniversary.

It can be challenging following in the footsteps of your father when he is one of the greatest receivers of all time. Yet, Thaddeus is doing his best to create his own identity and has been a key contributor on LSU’s dynamic offense.

Thaddeus began his career at NC State but later transferred to LSU. It is a move that has paid dividends as Thaddeus set a single-season LSU record for tight ends with 42 receptions for 534 yards, per ESPN.

Thaddeus admitted that sharing the Moss last name can be a “burden” given the Hall of Fame expectations that often follow it. The LSU tight end called it a “blessing and a curse” noting that his father tried to give him advice on how to handle the added pressure.

“He told me the last name means something,” Thaddeus told ESPN. “We’re normal people, but others don’t look at us as normal people. With the last name, people expect more of us and look at us a certain way. I’m 21 years old, but it’s still a burden. Obviously, having that last name carries its perks, but I always say it’s a blessing and curse at the same time. It has its ups and has its down with just the way some people treat you. They expect certain things from you.”


Randy Featured His Son on ESPN’s “You Got Mossed”

Randy is now an NFL analyst on ESPN and was recently able to feature his son on the well-known segment “You Got Mossed!” The weekly segment features the best catches of the week, and Thaddeus made it for an acrobatic reception against Alabama during the 2019 season.

“Alabama got Mossed, and everybody in that stadium got Mossed,” Randy said during the feature, per ESPN. “Way to go, son.”

Randy can also be seen in the stands at LSU games and recently attended the Tigers’ Peach Bowl win over Oklahoma to advance to the title game. Thaddeus noted how much it meant to have his dad at the game.

Thaddeus got to share another memorable moment with his father after the NFL legend asked his son to introduce him when he was inducted in the Pro Football Hall of Fame in 2018.

“I really didn’t have nobody in mind,” Randy told Mass Live. “So I was talking over with my wife, ‘Well, babe, who should I get to present me?’ And she didn’t give me an answer. So I said to myself, so you know what, I’m gonna pick my son Thaddeus.” 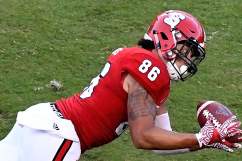