Thaddeus Moss has declared for the 2020 NFL draft, per ESPN’s Adam Schefter. Moss is the son of Hall-of-Fame wide receiver Randy Moss and the LSU tight end is hoping to follow in his dad’s footsteps to the NFL. Moss is not a highly-touted NFL prospect, but his play this season in a high-powered LSU offense has people taking notice.

Among the many evaluations of the young tight end, Bleacher Report’s Matt Miller described Moss as a “three-down talent.”

Thaddeus Moss, son of NFL legend Randy Moss, is a 6’3″, 250-pound athlete who is that mismatch that teams want at tight end. Unlike what you might be picturing, the younger Moss is an accomplished run-blocker and physical player over the middle of the field. This isn’t a diva tight end afraid of contact but a three-down talent. Moss, a junior, could return to LSU for another year, but he has the traits and tools to head to the NFL early.

Another breakdown comes from Rotoworld, who stated the belief that Moss is likely a “day three prospect” if he opted to declare for the draft.

While Moss is not without his intrigue, a Day 3 selection is probably his most realistic draft range if he is to land in April.

Moss set an LSU tight end record during his junior season with 42 receptions for 534 yards and two touchdowns. ESPN’s Mel Kiper explained he has Moss ranked as a top-10 tight end who has the chance to improve his draft stock even more if he returns to Baton Rouge for his senior season.

I have center Lloyd Cushenberry III, tight end Thaddeus Moss and offensive tackle Saahdiq Charles ranked among the top 10 at their positions, though all three are underclassmen who could return to school in 2020. LSU is loaded.

The Athletic’s Dane Brugler has Moss ranked as his No. 24 draft-eligible player in the national championship between LSU and Clemson, which shows just how impressive the overall star power is. Brugler cited Moss’ inconsistent play as the biggest area the tight end needs to improve.

Moss, who is the son of Pro Football Hall of Famer Randy Moss, isn’t quite the athletic marvel that his father was, but he flashes the ability to make similar wow catches that make you sit up in your seat. Despite those impressive plays, his consistency from snap to snap has been disappointing, both as a blocker and pass-catcher.

The LSU Tight End Is the Son of Randy Moss

In some ways, Moss’ last name poses a lot of challenges for the tight end when he does head to the next level. Moss is a junior who had an interesting decision to make prior to the draft as he could have returned to play at LSU for one more season. After his two-touchdown performance in the title game, Moss opted to strike while his stock is high.

Rather than being a tight end with room to grow, Moss is known as the son of an NFL legend which can often unknowingly raise expectations. Moss noted that his last name can be a “burden,” but it is something that he has dealt with his entire life.

“He [Randy Moss] told me the last name means something,” Moss told ESPN. “We’re normal people, but others don’t look at us as normal people. With the last name, people expect more of us and look at us a certain way. I’m 21 years old, but it’s still a burden. Obviously, having that last name carries its perks, but I always say it’s a blessing and curse at the same time. It has its ups and has its down with just the way some people treat you. They expect certain things from you.” 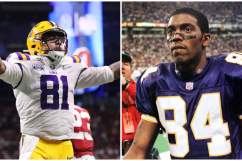