Here are my final thoughts on Raw and SmackDown Live’s 2020 Royal Rumble!

Reactions: This first-time meeting didn’t start out too interesting. Sheamus remained in control for most of the match’s opening moments, which resulted in a slog that was full of long submission holds and not a whole lot of spirited offense from Chad Gable. Once Gable finally kicked into comeback mode, that’s when things really kicked up a few notches. Gable’s always exciting to watch (sans the stupid gimmick attire he’s forced to wear) and his offense looked even more impressive against the much bigger Sheamus. The first half was definitely a bore, but the second half was a bit better in execution.

Reactions: This one was a slight letdown. It was a bit slower than I’m used to seeing from both men and the intensity wasn’t really there. The action was solid for what it was, but it just didn’t captivate me as much as Andrade and Rey Mysterio’s series of past bouts. Its longer than expected runtime should have resulted in a quality, fast-paced Lucha Libre encounter. But sadly, it was more of a plodding matchup that was more fitting on your usual episode of Monday Night Raw.

Reactions: Judging by the winner of this show-opening brawl, it looks like we’ve finally reached the end of the beef between the “Big Dog” and “The King.” And we couldn’t be happier about that development. This Falls Count Anywhere match was fun and easily the best match in both men’s months-long feud. What made it a solid affair was all the madness that ensued all over the arena – Roman Reigns and King Corbin took advantage of every piece of furniture and equipment they could find in order to destroy each other. The added element of Reigns and Corbin’s backup getting into their own mid-match brawl also gave this bout some extra steam. There wasn’t a whole lot of innovative moments to speak of here. The action was pretty basic, but it was still an entertaining affair overall.

Reactions: “WITH A TEAR IN MY EYE!” Anyone who’s seen Ric Flair’s 1992 Royal Rumble victory speech knows where that quote came from. Now another Flair can lay claim to winning the Royal Rumble – Charlotte Flair. Shayna Baszler looked like she was on the verge of making history as the first NXT representative to win the Royal Rumble, but it just wasn’t meant to be. As for the battle royal itself, it had a lot of cool moments.

The surprising return of Mighty Molly was a treat, Bianca Belair’s impressive run was awesome to see, Santina Marella’s cameo actually got a chuckle of out of me and the NXT/NXT UK ladies all looked amazing. Some other moments that stood out were Alexa Bliss and Nikki Cross’ alliance, Otis’ last-minute saves for Mandy Rose, and Naomi’s comeback/Kofi Kingston antics. This Women’s Royal Rumble featured some good action, a few nice surprises, and great representation from all of WWE’s brands. The winner, though? Kinda disappointing, honestly… 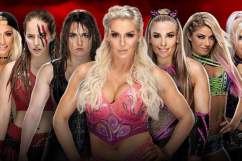 WWE Royal Rumble 2020: The Female Entrants You Need to Know

Reactions: This was kind of a bore. Bayley’s heel shtick doesn’t do anything for me, and judging by the reaction (or lack thereof) of the viewing audience, they feel the exact same way. This was similar in structure to the Shorty G vs. Sheamus bout. But unlike that Kickoff Match, Lacey Evans’ control period was nowhere near as exciting as Gable’s comeback offense. This was too much of a basic matchup that didn’t do enough to go beyond a SmackDown TV match type of quality. Bayley’s lackluster run as SmackDown Women’s Champion continues (zzzzzzzzzz…).

Reactions: Now look how much better this match was received without the dreaded red lighting! My expectations were low coming into this title match, but it ended up being a lot better than expected. “The Fiend” was a ruthless monster throughout this intense encounter and truly excelled at staking his claim as unstoppable.

Daniel Bryan added some extra fire to this bout with his hope spots and brought the crowd to its feet with his usual array of kicks, running knee strikes and submissions. This one got a lot of time to build into something special and featured several moments that made it look as if Bryan could do the impossible. I never thought I’d have such high praise for a strap match of all things, but Bray Wyatt and Bryan went out there and had one of the best matches of the entire evening. It seems like Bryan’s the only one who can get a good to great match out of The Fiend these days, huh?

Reactions: While this big rematch started out on a slow note, it did a good job of building into something worthwhile and quite thrilling. Asuka’s dominance was given plenty of time to cook and almost made me reconsider my prediction of Becky Lynch winning this time. Once Lynch landed a sick Gordbuster to Asuka on the outside, things began to kick into second gear. There was a constant series of stiff strikes and slick submission holds delivered by Asuka, while Lynch pulled out a few tricks that involved the use of the ropes at certain points. The lengthy runtime helped this title match fulfill its potential and allowed both ladies to look as strong as ever. Lynch finally overcame her biggest problem and she looked good while doing it.

Reactions: What a way to end the show! This year’s Men’s Royal Rumble match told a great story from start to finish. It kicked off with WWE Champion Brock Lesnar’s complete domination of everyone that stood before him and a few instances where it looked as if he would get eliminated. When Kofi Kingston, Big E and Rey Mysterio linked up for a few moments, everyone (including me!) lost their collective minds. The three-man hoss war that erupted between Lesnar, Keith Lee, and Braun Strowman was also a standout moment that put this battle royal on another level. Drew McIntyre’s shocking elimination of Lesnar was a career-defining moment that may lead to something even grander at WrestleMania 36.

Once Lesnar got kicked out of the match, the excitement stayed intact the whole way through. Edge of all people came out and looked like he didn’t miss a step the whole time he was retired. We got plenty of Spears and even a few Rated RKO flashbacks from that point forward. Edge ended up getting rid of AJ Styles, which points to an interesting situation that hopefully erupts at ‘Mania 36. Seth Rollins and company had a pretty amazing closing run as he and his cronies worked like a well-oiled machine. Rollins’ brief moments of success didn’t pave out all the way, however. This year’s final four (Edge, Randy Orton, Roman Reigns and McIntyre) produced a fiery closing stretch and a satisfying conclusion that will be talked about for years to come. CONGRATS DREW! 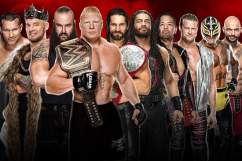 WWE Royal Rumble 2020: The Male Entrants You Need to Know

The 2020 Royal Rumble events provided a good start to WWE’s new year. While the Kickoff Show bouts and Bayley vs. Lacey Evans were nothing to write home about, everything else on the card delivered in spades. Reigns and Corbin gave everyone a decent brawl to kick off the show, the Women’s Royal Rumble was pretty exciting (sans the winner), the Universal Championship strap match was way better than it had any right to be, Lynch and Asuka gave us another hotly contested tile match and the Men’s Royal Rumble was an excellent show-closing spectacular. 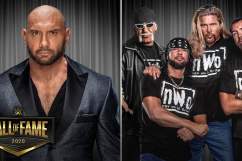